More coronavirus cases recorded, school suspensions extended, more equipment moved by the US, and testing machines arrive from Kurdistan. Catch up on everything that happened over the weekend. 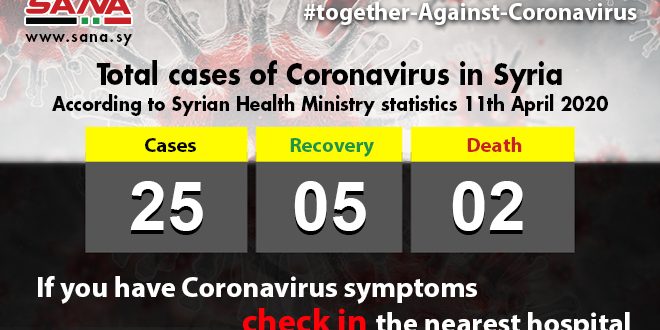 1. Six new cases of coronavirus (COVID-19) were registered in Syria on Saturday, bringing the total number of the cases to 25, the Health Ministry said, according to SANA. So far, four of the registered cases have recovered and two others died, the first of which was registered on Mar. 29, 2020. Later, the ministry announced that one patient with coronavirus has recovered, raising the total number of recovered patients to five.

2. The government team in charge of confronting the coronavirus (COVID-19) decided to extend the suspension of schools and universities until May 2, 2020, SANA reported.  During its meeting on Saturday chaired by Prime Minister Imad Khamis, the team stressed the need for the strict implementation of the curfew in all areas, to restrict movements and limit gatherings that endanger public health.

3. US occupation forces continued their violations of international laws, transporting tens of vehicles loaded with military equipment and logistical equipment to their illegitimate bases in the Hassakeh countryside. According to Al-Watan, a convoy of US occupation forces headed from Hassakeh to the southern region along a road connecting Hassakeh and Deir ez-Zor provinces.

4. Hay’at Tahrir al-Sham executed four people in Syria’s rebel-held Idleb province on Saturday after accusing them of murder, theft, and kidnapping, Al-Masdar reported. Social media pages of people close to Tahrir al-Sham said that the executions had taken place in the town of Mahambel, after the condemned people had been found guilty of kidnapping and murdering the owner of a money exchange office in 2018.

5. This week, two PCR testing machines arrived in northeast Syria from the Kurdistan Region, which will help the Syrian-Kurdish–led authorities to test for coronavirus infections. “Utmost thanks and appreciation to the President of Kurdistan Region, Nechirvan Barzani,” the Commander-in-Chief of the Syrian Democratic Forces General Mazloum Abdi tweeted on Sunday, according to Kurdistan 24.