With ceasefire in place, a number of families have returned to their homes in the western countryside of Idleb, but they fear an outbreak of the coronavirus reports Brocar Press. 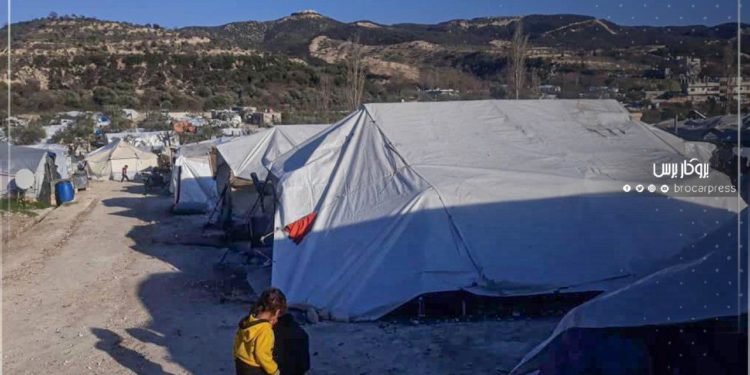 A number of Syrian families left the displacement camps in Idleb’s western countryside, after calm prevailed in their villages, but fear the outbreak of the new coronavirus.

People returned to the towns of Bidama, Najiya, Kindah, Maraand, and Obeen.

Speaking to Brocar Press, Samer Hassoun, one of the returnees to Badama said that the situation in the camps is frustrating, stressing that they’re living in constant fear of the spread of the coronavirus.

Hassoun says if the virus spreads it would be hard not to get infected, considering the lack of preventive methods, because it’s impossible to stay in the tent permanently, especially for kids. The space is limited while the water supply and toilets are shared.

“Returning home is much better, even if the rooms were damaged. They can either be fixed or simply abandoned,” he said, adding that the camps were not deserted for good.

“People would return to their tents if battles resumed in their areas,” noted Hassoun.

The planting season was an additional factor that encouraged people to return to their towns, as most of them work in agriculture.

For them, this is the perfect period to work and prepare for the finest agricultural products, in the hope to reap their harvests in summer. They took advantage of the calm that prevailed following the deal reached between Turkey and Russia earlier in March.

Meanwhile, other families returned to rebuild their damaged homes supported by aid agencies that are working to restore life in the area, with assistance from the Civil Defense teams.

For his part, activist Ahmed al-Hajj told the Brocar Press that the Civil Defense teams were working tirelessly to restore streets, clean and sterilize public facilities, such as mosques and schools, and continuously taking care of cities and villages by removing rubble and reopening closed roads.

Hajj also highlighted several initiatives working to secure water for returning families and tackling hygiene-related issues in cooperation with the local council and other organizations operating in the region.

Villages and towns in the western countryside witnessed huge waves of displacement last year as people escaped the constant shelling from the battles between the regime and other factions on the fronts of Lattakia’s countryside. People resorted to the camps on the border, waiting for the situation to settle.

Idleb has been witnessing relative calm since the ceasefire agreement between Russia and Turkey was announced in Moscow, under which a safe corridor was established on both sides of the international Aleppo-Lattakia road, also known as M4.

Ever since the deal was announced, Russian and regime warplanes stopped flying above Idleb and the regime’s breaches were limited to using artillery and attempting to infiltrate the Idleb and Hama fronts.