A fire at a camp kills children, minor earthquake felt on the Syrian coast, condemnation of Israeli actions in the Golan and Turkey continue to request help from the US. Catch up on everything that happened over the weekend. 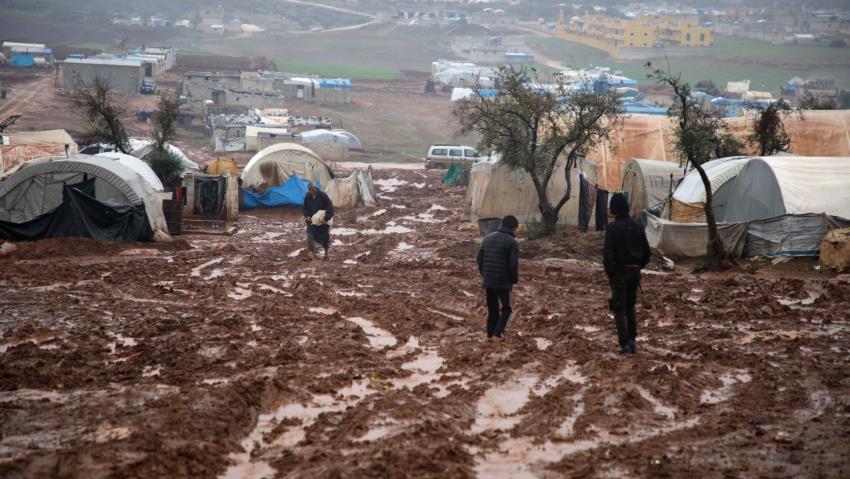 1. Four children from the same family lost their lives on Friday when their tent caught fire in a refugee camp in northeastern Hassakeh province, Zaman Al Wasl reported. Three more family members were hurt in the Nowruz camp fire near the city of al-Malikiyah. The family had been displaced along with 160,000 people from the border region of Ras al-Ayn last October when the Turkish military and the Syrian National Army expelled Kurdish forces with the aim of creating a roughly 30 kilometer (20-mile) deep buffer zone.

2. A light earthquake was registered at 4.7 on the Richter scale on Friday evening on the Syrian coast at a depth of 20 kilometers and 65 kilometers from Lattakia city, SANA reported. The National Center for Seismic Monitoring said the earthquake occurred at 9:15 pm local time, and was felt by people in Lattakia, Tartous, Hama, Homs, and Aleppo.

3. Syria has condemned the systematic violations committed by the Israeli occupation authorities, which affect the human rights of the Syrian citizens living in the occupied Syrian Golan. They have denounced their actions as a violation of the relevant United Nations resolutions and the provisions of the Fourth Geneva Convention of 1949. According to SANA, a letter was sent on Friday by Syria’s Permanent Representative to the United Nations in Geneva Ambassador, Hossam el-Din Ala, to the head of the Special Committee to Investigate Israeli Practices Affecting the Human Rights of Palestinian People and Other Arabs of Occupied Territories.

4. Turkish security forces neutralized at least seven YPG/PKK fighters in northern Syria, said the National Defense Ministry, according to Anadolu News Agency. “Two YPG/PKK terrorists, who opened fire in the Operation Euphrates Shield area, and five YPG/PKK terrorists, who were attempting to infiltrate the Operation Peace Spring area, were neutralized by our heroic command,” the ministry said in a tweet. Turkish authorities often use the word “neutralize” to imply the terrorists in question surrendered or were killed or captured.

5. The US is ready to provide an “assistance package” to Turkey in northwestern Syria’s Idleb, if Ankara rejects the S-400 missile systems, US ambassador to NATO Kay Bailey Hutchison said on Wednesday. According to the Turkish Daily Sabah, Hutchison said, “We hope that we can generate a package that can help Turkey, and I also hope that Turkey will not deploy the Russian missile defense system, which blocks some potential support that we can provide to Turkey to fight against Syrian attacks,” in response to a question about the risk of clashes in Idleb and Turkey’s demand for support from both NATO and Washington.  Hutchison added, “We want the area in Idleb where civilians got stuck in to be protected…  We hope that Turkey will eject the missile defense system stationed in the middle of Ankara and will give us the freedom to help them to protect Syria and its civilians.”