Russia announced that it had deployed military police in Saraqeb, although the claim was questioned by many, and seen as a ploy to create a balance with Turkey writes Nadaa Syria. 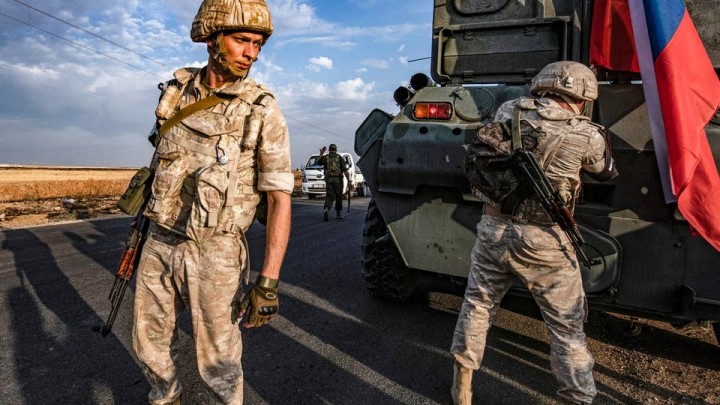 The Russian Ministry of Defense has announced the deployment of military police in the strategic city of Saraqeb, located at the intersection of the international M5 and M4 highways in eastern Idleb province.

In response to the Russian announcement, the spokesman for the Syrian National Army, Major Youssef Hammoud, said: “The statement issued by the Russian Ministry of Defense regarding the deployment of its forces in the city of Saraqeb is far from a reality.”

The Jusoor Center for Studies believes that the Russian declaration aimed to achieve several goals, including: Expressing rejection of Turkish demands for the Russians to stay neutral during Turkey’s operation against the Assad regime in Idleb province, as well as Moscow’s efforts to obstruct Ankara’s efforts to achieve this operation, which it called ”Spring Shield,” and aimed primarily at driving the Assad regime back to the Sochi agreement borders.

The Russian forces also aim to demoralize the opposition groups by broadcasting propaganda that there had been a Turkish-Russian understanding regarding Saraqeb’s future, and thus curb their ability to attack and defend.

The center added that the fourth goal was, “establishing a new reality on the ground ahead of the bilateral summit between the Turkish and Russian presidents in the hope that this will help support Russia’s position during the talks.”

Turkey has not yet commented on the Russian Ministry of Defense announcement that it would deploy police forces in Saraqeb, which coincided with ongoing clashes in the area between rebels groups and militias.