New markets are opening up in towns and cities, leading to speculation that they are primarily for the selling of looted goods writes Al-Modon. 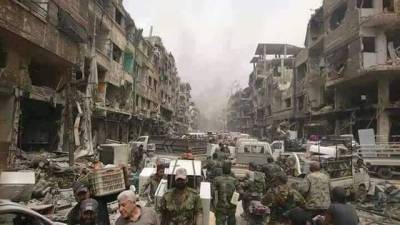 A law approved by the economic council of the regime government, which provides for squares to be allocated in all Syrian cities and towns for popular markets on Fridays, is helping regime forces find new markets to sell looted goods from the areas they recently took control of.

The government justified its decision by saying that it aims to provide goods at affordable prices for citizens, and to reduce the chaos in public squares that are being invaded by vendors. But these justifications were not convincing in Syrian opposition circles, who said that the timing of the decision was linked to the revival of the looting trade in regime-controlled areas after its forces advanced and took many cities and towns in the Idleb and Aleppo countrysides.

Over the past few months, the market for stolen goods has witnessed a boom, driven by increased demand after they became abundant following regime progress in areas with large urban areas in the countrysides of Hama, Idleb, and Aleppo.

Activists circulated images documented by Western media in areas recently taken by the regime, showing some of the looting. Some videos show regime soldiers and militias stealing the contents of homes in Maarat al-Nu’man and other areas.

It appears from the contents of the new decision that it helps encourage looting, and opening new markets for looted goods, after the traditional markets in the big cities were flooded with goods. This is in keeping with the regime’s inclination to satisfy the “shabiha,” by helping them sell stolen goods in new markets.

A source on the Syrian coast told Al-Modon that the looting trade had been revived, and attributed this to the regime’s rapid advance over large cities (Khan Sheikhoun, Maarat al-Nu’man, Saraqeb, Ad Dana), which prevented people from being able to flee with their furnishings and the contents of their homes.

The source said that, “the increase in the supply in the local markets led to near-saturation, prompting shabiha to search for new markets. It appears that the new decision is the regime legitimizing this trade.”

Regarding why people buy these goods  despite knowing that they are illegal, the source explained that, “some buy them because of their cheap prices, which are not comparable to prices for new goods, while others buy these goods as a kind of support for the fighters—these are the hardcore loyalists.” The source added that “a decent portion totally refrain from dealing with them.”

A member of the Syrian Legalists Committee, lawyer Abdel Nasser Hoshan, was certain that the goal of the decision was to find new markets for the disposal of stolen goods from the cities and towns that the regime recently retook, asking sarcastically: “Do you expect the regime to export the goods to neighboring countries?”.

He told Al-Modon that, “looting is one of the regime’s methods to entice fighters, as they turn a blind eye to the looting as a kind of compensation for the low wages the fighters receive, which are at best no more than 40,000 Syrian pounds (about 40 dollars a month).”