Mozon al-Mleihan has been awarded the Dresden Peace Prize for her work with children and education reports Arab-Europe. 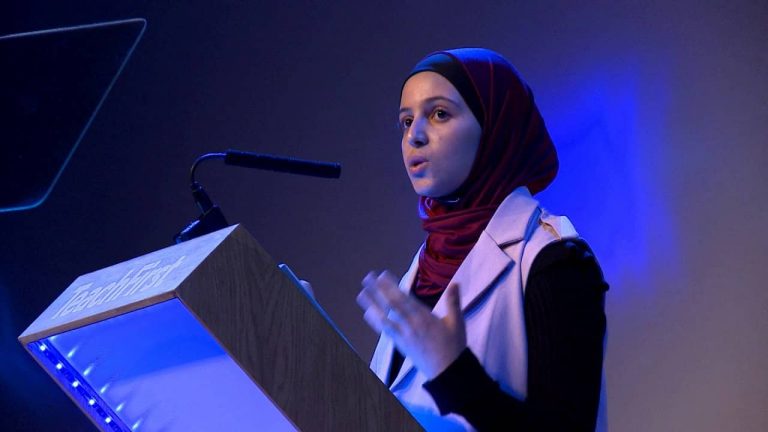 Syrian activist Mozon al-Mleihan has been honored with the Dresden Peace Prize for her bravery and exceptional activism.

The young Syrian woman was granted the prize for her work in easing obstacles for children and young people and her attempts to find opportunities to educate children and to ease the obstacles facing them.

Mleihan fled from the city of Daraa in Syria’s southwest because of the bombing and shelling and with her family arrived in 2013 to the Zaatari camp in Jordan when she was 14 years old. She brought with her a bag full of books and started to go from one camp to another to convince parents and children of the importance of education, which is the “key to the future” for success.

The young Syrian woman, who is 21 years old, now lives in Britain. In 2017, she was appointed as the youngest UNICEF goodwill ambassador. She spoke in the German city of Hamburg, during the G20 summit, with political representatives about the millions of children who were forced by conflict and war and natural disasters to flee their homes. She was chosen by Time magazine in 2017 as one of the most influential teens in the world.

The Dresden Peace Prize was awarded for the 11th time and the celebrations will be held in the Dresden Opera House. The previous recipients of the award include the former Soviet Union President Mikhail Gorbachev and the war photographer James Nachtwey.