The Russian airforce is continuing to target the homes of civilians, while also attacking the vehicles that they are using to flee in reports Alsouria Net. 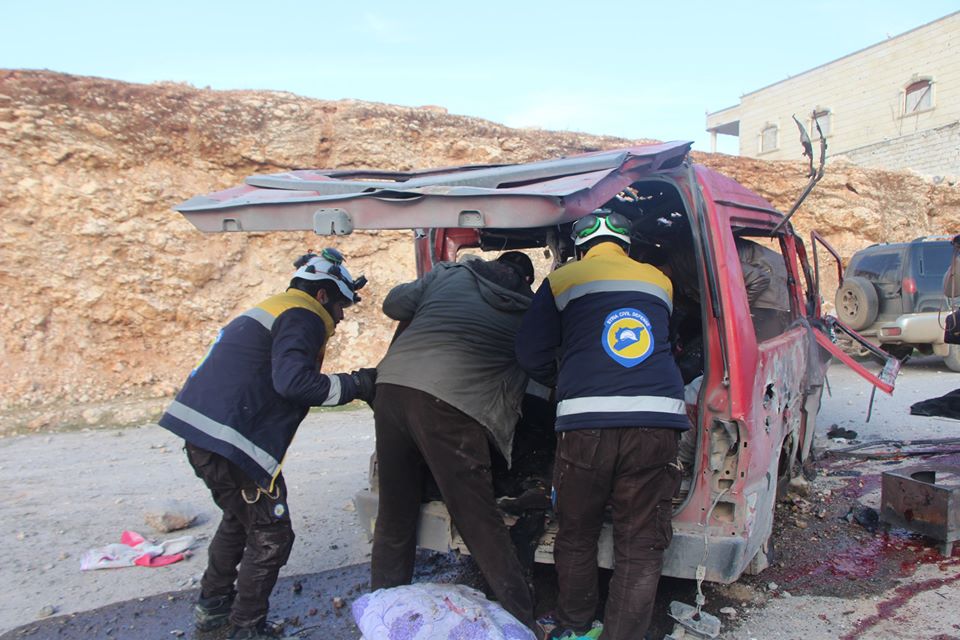 Nine civilians from one family were killed when Russian warplanes struck a bus they were using to flee the al-Rahal village in the western Aleppo countryside.

The Syrian Civil Defense said on Monday that Russian warplanes struck a bus carrying a displaced family, killing nine civilians, including four children and three women, while wounding others.

The Civil Defense added that the bus was hit in the Rahal Association area in the western Aleppo countryside.

The western and southern areas of the Aleppo countryside are experiencing an escalation by Russian warplanes, alongside attempts by Assad’s forces to advance on three fronts towards areas controlled by opposition factions.

According to the Civil Defense, nine civilians, including women and children, were wounded in an airstrike that targeted homes in Atarib city in the western Aleppo countryside.

The group said that four people, including a woman, were killed on Sunday, and 14 people were wounded, including four children, after heavy airstrikes and artillery shelling by Assad’s forces and Russia on the western, southern and northern parts of Aleppo, including Urum al-Kubra.

Meanwhile, 12 civilians, including five children and three women, were killed and nine others were wounded on Sunday when Russian and Assad regime warplanes struck villages and towns in the eastern Idleb countryside.

The Aleppo Media Center said that the Russian airstrikes hit the towns of Kafr Dael and Mansoura in the western countryside of Aleppo, in addition to the cities and towns of Saraqib, Sarmin, Ephesus, Neirab and Qaminas in the eastern countryside of Idleb and the vicinity of Jabal al-Arbaeen, south of Idleb.

Assad’s forces have advanced over the past two days in the south of Idleb, where they entered Maarat al-Nu’man and continued north to the village of Ma`radbasa, south of Saraqib, on the international Aleppo-Damascus highway.

Fighting also continued on the southwestern fronts of Aleppo, where Assad’s forces are trying to advance, and are facing resistance from rebel groups, especially at the Khan Toman, al-Sahafiyeen and Khalsa fronts.

With these attempts to advance, Russian warplanes are staying active, focusing on civilian areas, whether in the southern and western Aleppo countryside or the eastern and southern Idleb countryside.