A report by The Syrian Network for Human Rights has documented attacks by the regime and Russia on refugee camps. 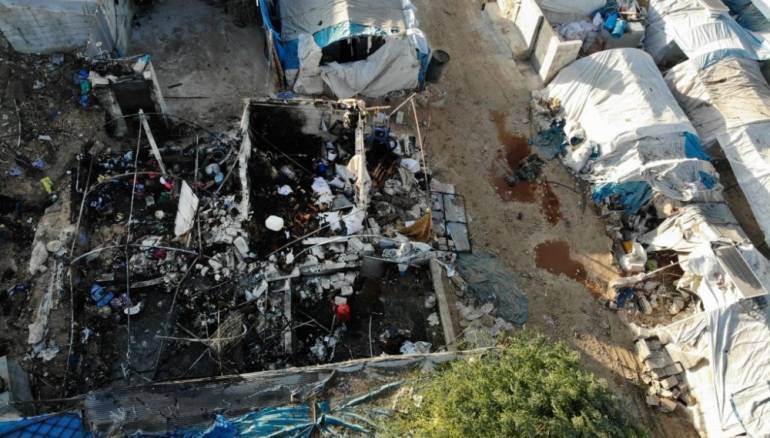 The Syrian Network for Human Rights (SNHR) said the Syrian regime and allied Russia are responsible for the bombing of an IDP camp and the killing of 11 Syrian children.

The report further reveals that the attack caused the displacement of approximately 80 percent of the already displaced camp residents, who fled out of fear of the camp would be subjected to further attacks. At the time of the report’s publication, SNHR has recorded only a small percentage of these people returning to the camp.

The report reveals that there have been at least 12 attacks carried out by Syrian Regime forces, in which Tochka-series missiles were used, with the missiles being loaded with cluster submunitions in at least three of these cases.

The report further reveals that at least 487 cluster-munitions attacks have been recorded since the first documented use of these munitions in July 2012 up to Nov. 20, 2019, with 243 of these attacks being carried by the Syrian regime forces, and another 236 by Russian forces, with an additional eight attacks by Syrian-Russian operations.

The report stresses that Syrian-Iranian-Russian alliance forces have undoubtedly violated UN Security Council Resolutions 2139 and 2254, which demanded the cessation of indiscriminate attacks, in addition to violating a wide range of customary international humanitarian law rules, and also violating articles 7 and 8 of the Rome Statute by committing intentional homicide, all of which constitute war crimes and crimes against humanity.

The report stresses that the bombardment of the IDP camps and civilian gatherings has spread further terror and fear among already traumatized displaced persons and has grossly exacerbated their disastrous humanitarian situation, which is already suffering from a deterioration in terms of the initial humanitarian response.