Russian airstrikes hit Idleb, Turkey expels refugees, regime forces deploy on the border, Russia takes control of US airbase and the UN affirms Syrian rights to the Golan Heights. Catch up on everything that happened over the weekend. 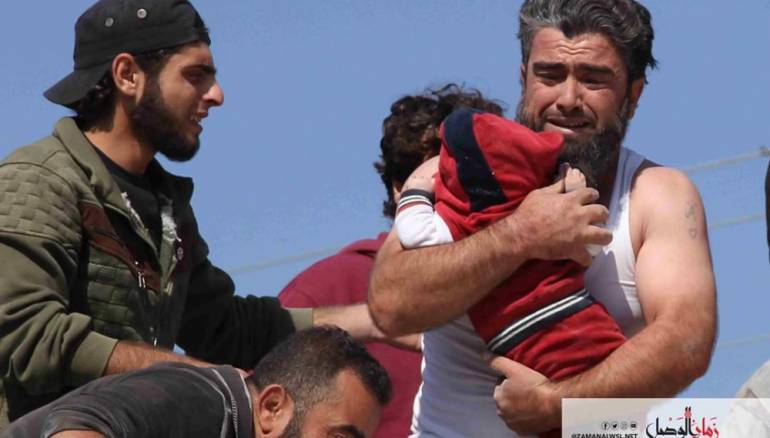 1. Seven civilians were killed in Russian airstrikes on residential areas of the de-escalation zone of Idleb, the White Helmets said in a statement. Ten others were injured in attacks targeting the town of Kafar Roma and the village of al-Bara in northwestern Syria. Russian warplanes targeted the villages of Eshtabraq and Marj al-Daher. At least 50 civilians, including 15 children, have been killed in Idleb province by the Syrian regime and Russia in the past two weeks.

2. On Friday, Turkey said it had expelled more than 40,000 refugees living in Istanbul and sent them back to the provinces where they were initially registered, Al-Araby Al-Jadeed reported. Syrian refugees living in Turkey’s largest city without a valid permit were given until the end of October to leave voluntarily. The deadline was delayed amid increased international scrutiny and allegations that Ankara had deported vulnerable Syrians to an active war zone.

3. On Thursday, Syrian regime forces started deploying in areas close to the Turkish border in the country’s northeast as part of an agreement reached between Russia and Turkey, state media reported. SANA said troops were deploying between the towns of Jawadiyeh and Malkiyeh, also known as Derik, while state-run TV said Syrian border guards will be positioned at six points near to the frontier. The deployment along much of the northeastern border is part of a cease-fire deal brokered by Moscow last month that seeks to clear the area of the Kurdish fighters who were key US allies in the fight against the Islamic State. Since the agreement was reached, Russia and Turkey began joint patrols along a narrower strip directly on the Turkish-Syrian border.

4. Russia landed attack helicopters and troops at a sprawling airbase in northern Syria vacated by US forces, Zaman al-Wasl said. In footage aired on Zvezda, armed Russian military police were shown flying into the Syrian air base in northern Aleppo province near the border with Turkey and fanning out to secure the area. The move comes after US President Donald Trump abruptly ordered the withdrawal of US troops from parts of Syria last month. The facility will be used as a centre to distribute humanitarian aid to local residents and the military aerodrome is now controlled by Syrian government forces allied with Moscow, Zvezda said.

5. The UN General Assembly reaffirmed by an overwhelming majority Syria’s sovereignty over the occupied Golan Heights and over its resources, demanding that Israeli occupation authorities cease exploiting, damaging, squandering, depleting or endangering its natural resources. This, according to SANA, came in a resolution approved by the Economic and Financial Committee of the General Assembly, with 156 states voting in favor of the resolution, while six voted against and 14 abstained.