SANA has visited the victims of the latest Israeli attack in al-Muwasat University Hospital, which included women, children, and elderly people. 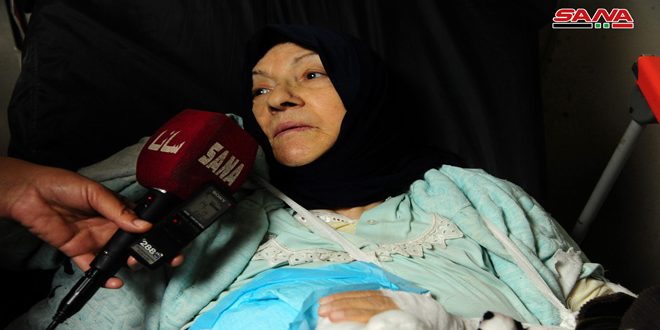 The people of the western al-Mezza area in Damascus were roused from their sleep on Tuesday morning by an Israeli missile attack that targeted a residential building, martyring two and injuring a number of civilians, including women, children, and elderly people.

The attack, which was carried out by Israeli warplanes, also caused massive material damage to the building and nearby buildings, including the home of the Ambassador of Pakistan.

SANA visited some of the injured people who were admitted to al-Muwasat University Hospital, where one of the injured, a woman in her 80s named Rabia Hashem Safad al-Halabi, said she had suddenly felt as if the building was collapsing on top of her head, and started crying out in fear for her children, then she passed out and woke up in the hospital.

Bashar al-Hayek said he and his family were asleep when the first explosion occurred, shattering windows and doors, then came a second, stronger explosion, and he found his children, wife, and mother under rubble, adding that his mother and wife suffered from broken bones as a result of the attack.

Ten-year-old Ala’a al-Hayek, whose face showed bruises and wounds, said he was asleep when an explosion sent him flying from his bedroom into another room, then the house collapsed, and he found himself among the wreckage with injuries on his hands, feet and eyes, adding that his brother was also injured.

The Assistant Director General for Medical Affairs at al-Muwasat University Hospital, Ammar al-Raei, said two martyrs have been admitted to the hospital, along with eight injured people.