US President Donald Trump has announced that an operation conducted in northwestern Syria ended with the killing of ISIS leader Abu Bakr al-Baghdadi reports Al-Araby al-Jadeed. 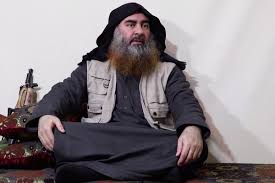 Trump confirmed details published earlier, including reports Baghdadi killed himself and three of his children with a suicide vest as US special operations forces approached his position in Syria’s Idlib region.

US forces killed a “large number” of Islamic State militants during the raid which culminated in cornering Baghdadi in a tunnel, where he set off a suicide vest.

“He ignited his vest, killing himself,” Trump said.

“He died after running into a dead end tunnel, whimpering and crying and screaming all the way,” Trump said.

Trump said that the raid – which required flying more than an hour by helicopter in both directions from an undisclosed base – had been accomplished by help from Russia, Syria, Turkey and Iraq.

Special forces “executed a dangerous and daring nightime raid in northwestern Syria and accomplished their mission in grand style.”

“His body was mutilated by the blast. The tunnel had caved in on it in addition. But test results gave certain immediate and totally positive identification. It was him.

“The thug who tried so hard to intimidate others spent his last moments in utter fear, in total panic and dread, terrified of the American forces bearing down on him,” Trump said at the White House.

Trump thanked “Russia, Turkey, Syria and Iraq” for the joint secretly planned operation that led to this death.

Shortly after the announcement, Baghdad said it provided Washington with the location of the IS leader, who has been long pursued by the US-led coalition against the Islamic State (IS) and erroneously reported dead several times in recent years.

Baghdadi, a native of Iraq around 48 years old, built the violent jihadist movement into a potent force, in 2014 establishing its own “caliphate” territory across large swathes of Syria and Iraq.

It was blamed for the deaths of thousands of civilians, in summary executions and beheadings, and accused of war crimes.

But Baghdadi has been on the run since a US-led coalition slowly destroyed the group’s organisation and ousted it from its claimed territory in a two-year campaign, finally declaring victory over IS in March of this year.

In rare video and audio messages this year, Baghdadi called on IS fighters to regroup and try to free thousands of their comrades captured by the US-allied Syrian Democratic Forces in northeastern Syria.

Thousands of fighters from the jihadist group are held in overcrowded prisons in Iraq and Kurdish-held regions of Syria, while tens of thousands of their family members are held in camps.

In Syria, where IS in March lost the last scrap of its self-declared “caliphate”, hundreds of suspected jihadists are in the custody of the Kurdish-led Syrian Democratic Forces which spearheaded the fight against IS.

Kurdish authorities say 12,000 foreigners from as many as 40 countries, including 4,000 women and twice as many children, are in camps it runs in northeastern Syria.

In April, IS released a video urging its supporters to continue their battle and showing Baghdadi for the first time in five years.

Despite their territorial defeat, the jihadists have continued to operate sleeper cells and launch attacks in both Iraq and Syria.

Who is Abu Bakr al-Baghdadi?

Baghdadi has been rumoured dead many times. A character shrouded in mystery, making only one public appearance in 2014, Baghdadi’s real name may be Ibrahim Awwad Ibrahim al-Badri, and he may have been born in 1971 in Samarra, an ancient Iraqi city in the so-called Sunni Triangle north of Baghdad.

He may have been a cleric in a mosque in the city around the time of the US-led invasion in 2003. Reports suggest he was radicalised during the four years he was held at Camp Bucca, a US prison in southern Iraq where many al-Qaeda commanders were detained.

He emerged as the leader of al-Qaeda in Iraq, one of the groups that later became Islamic State of Iraq and the Levant (ISIS) in 2010 and then Islamic State group in 2014, and rose to prominence during the failed merger with al-Qaeda-linked Nusra Front in Syria (now Jabhet Fateh al-Sham).

He did not swear allegiance to the leader of the al-Qaeda franchise, Ayman al-Zawahiri, who had urged IS to focus on Iraq and leave Syria to al-Nusra.

Baghdadi and his fighters split with al-Qaeda and pursued an ultra-violent form of extremism that included bringing back slavery, engaging in genocide on non-Muslim minorities and Shia Muslims, and applying an extreme version of Islamic capital punishments, involving live immolation and mass beheading.

The group and lone wolves inspired by it have claimed numerous terror attacks from the US to the Philippines, via Europe and the Middle East.

In 2014, following his group’s rapid capture of Mosul and vast swathes of western Iraq, he declared himself from the pulpit of al-Nouri Mosque in the Old City of Mosul the new caliph, leader of the entire Muslim nation, a title abolished in 1924 with the fall of the Ottoman Empire.

The United States had posted a $25 million reward for information on his whereabouts.