As the first meeting of the constitutional committee approaches, Geir Pederson has held meetings with Walid al-Muallem to discuss the committee's mechanisms and developments in the north east writes SANA. 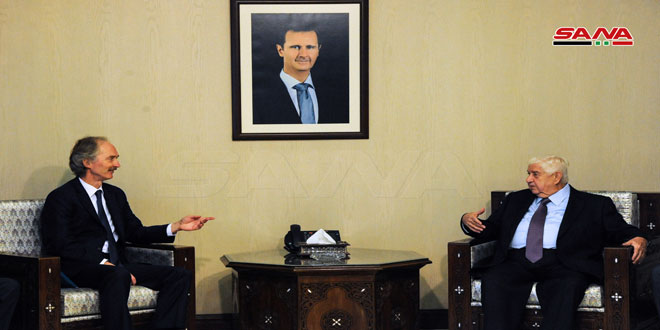 Talks during the meeting discussed in detail all issues and measures related to preparing for the first meeting of the constitutional committee, which will be held by the end of October in Geneva, as both sides underlined the importance of the continued coordination, to ensure the success of the committee’s work and overcome all possible obstacles.

The two sides reaffirmed that Syria owns the committee’s work and that the Syrian people should lead its work by themselves without any foreign interferences, underlining the necessity of adhering to the rules and measures which were agreed to be a reference for the work of the committee that would guarantee the achievement of the hoped-for goal.

Both sides tackled the latest developments in northeastern Syria and their possible and serious effects on the work of the constitutional committee and on the political track.

Muallem indicated that Syria will continue to face terrorist organizations and the forces that attack its sovereignty and independence, affirming that protecting the Syrian people is the task of the Syrian state and the Syrian Arab Army alone and the hostile behavior of the Erdogan’s regime clearly exposes Turkey’s expansionist ambitions in the Syrian territories.

He added that this hostile behavior can’t be justified under any pretext and it seriously threatens the work of the constitutional committee and the political track and prolongs the crisis in Syria.

Pedersen, for his part, briefed Muallem on the outcomes of his recent meetings and contacts with regards to Syria and the launching of the work of the constitutional committee, expressing readiness to exert all possible efforts for achieving what is required from him in framework of his specified tasks

Pedersen expressed the deep concern of the Secretary-General and the UN over the dangerous developments in northeastern Syria and their serious humanitarian consequences, calling for an immediate stop to hostilities and acts that threaten civilians and undermine Syria’s sovereignty and territorial integrity and undermine stability and endanger the exerted efforts on the political track.