Continued Turkish attacks in northern Syria, a new military force in Deir ez-Zor, ISIS attack in Qamishli and EU countries suspend arm sales to Turkey. Catch up on everything that happened over the weekend. 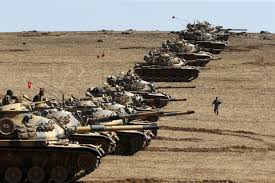 1. Nine people were killed when a convoy carrying foreign journalists and civilians was reportedly struck by a Turkish jet on Sunday afternoon, a war monitor and local media have reported. According to Rudaw, the convoy had been heading to Ras al-Ayn from Tel Tammar in northern Syria when it was caught in an airstrike. Among the victims were five civilians and a journalist.

2. On Sunday, Turkish forces occupied the villages of al-Dweira, Harobi, Raj’an and the Mabrouka power plant in the Ras al-Ayn countryside and the town of Sluk in Raqqa’s northeastern countryside, SANA reported. Parts of Tel Abyad town in northern Raqqa were also occupied, the reporter mentioned, adding that Turkish forces entered the headquarters of the so-called General Security of the Syrian Democratic Forces. Meanwhile, people from Hassakeh and Qamishli took to the streets in protest of the Turkish aggression.

3. Local sources told Deir Ezzor 24 that Assad’s forces are forming a new military force in Deir ez-Zor, under the name of the “Villages Army.” According to the sources, the faction belongs to Iran, and Iranian military figures have already begun recruiting people at the Iranian Nasr Center on Port Said Street in Deir ez-Zor. The sources noted that in the past few days, 100 volunteers have been recruited into the “Villages Army,” which is similar in its structure to the Russian-backed tribal army, which consists of committees that will be deployed in the Deir ez-Zor countryside (east of the Euphrates) as an alternative to Assad’s forces in the region.

4. On Friday, the Islamic State (ISIS) targeted a Kurdish militia with a car bomb attack in northeast Syria, while Turkish military operations intensified, despite concerns expressed by much of the world. The deadly car bomb in Qamishli, Al-Araby al-Jadeed reported, struck amid intense Turkish shelling. Meanwhile, five members of ISIS fled imprisonment, while foreign women belonging to the group torched tents and attacked guards with sticks and stones at a camp where they are being held.

5. On Saturday, France joined Germany in suspending arms exports to Turkey over its offensive against Kurdish fighters in Syria, as protesters denounced Ankara at rallies in several European cities, Al-Araby al-Jadeed reported. In a joint statement from the defence and foreign ministries, France said it had suspended all planned exports of “war materials” to Turkey that could be used in their offensive in Syria. The Paris statement came hours after Germany, one of Turkey’s main arms suppliers, also said it had suspended exports.