The opposition have been accused of breaking the rules by holding constitutional meeting with the High Negotiations Committee in Riyadh writes Al-Watan. 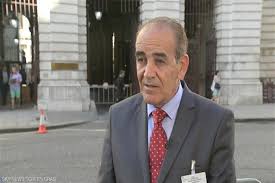 In a clear declaration of its intentions to violate all procedures that govern the working mechanism of the constitutional committee, which was approved by the United Nations, the “Riyadh committee” has announced its intention to obstruct the committee’s work in statements in which it confirmed that it had been working for more than a year and a half on a new constitution!

A member of the committee on the opposition list, a spokesman for the High Negotiations Committee, which is headquartered in Riyadh, Yahya al-Aridi, said in a statement carried by opposition agencies that, “We have studied all forms of constitutions and forms of government and we have worked for 18 months … and it will not take more than two months to finish a draft of the constitution for the country.”

Aridi’s statements have revealed that the opposition is violating the contents of the agreement to form the constitutional committee and its rules of procedure and terms of reference, which stipulate discussion of the 2012 constitution. Damascus, through Foreign Minister Walid al-Muallem, has said that, “all the talk about a constitution being ready is unacceptable. These are preconceived formulations. The committee is its own master and it will discuss, decide and vote on every item which will be agreed upon.”

Aridi claimed that they are working on two basic criteria regarding the constitution. The first is that the constitution be enforceable, and not one that can be violated or changed. The second is that every Syrian be guaranteed equal citizenship and not allocated based on a specific party’s power, and that the division of powers be implemented and opportunities provided on the basis of citizenship and not sect, ethnic or family affiliation.

Farhan said: “The Negotiations Committee prepared, through the committees that were formed, all its documents for the constitution’s contents, and they will be discussed, as well as the tactics that should be pursued during the committee’s work”!