Before the start of the constitutional committee, UN Special Envoy to Syria, Geir Pederson, will visit Syria to meet with regime officials reports Alsouria Net. 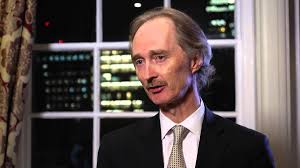 The UN Special Envoy to Syria, Geir Pedersen, is to visit the Syrian capital Damascus to meet Assad regime government officials on Oct. 15 and 16, 2019.

During his trip to Damascus, Pedersen will meet Foreign Minister Walid Muallem to discuss the “final details” before the start of the first Syrian constitutional committee meeting on Oct. 30, 2019, according to the Russian TASS news agency on Tuesday.

During the conference, Hariri called for “real” international support to find a political solution in parts of northwest Syria, where the Syrian regime has been carrying out a military campaign since April, which has led to a collapse of the humanitarian situation in the area.