In areas outside government control in northern Syria, the damage to the educational system has been extensive, Brocar Press reports 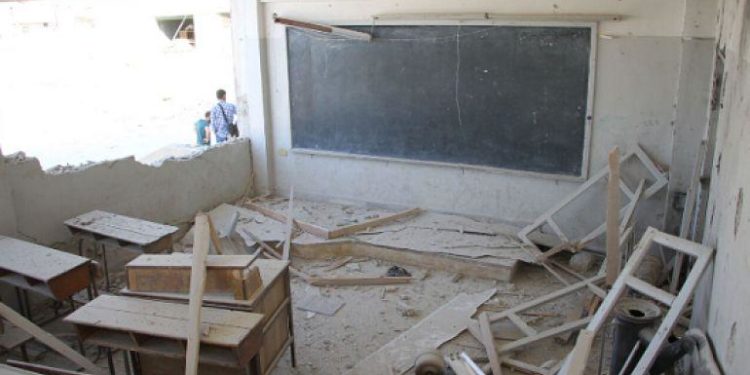 The Humanitarian Response Team said on Monday that the losses of the educational sector in northwest Syria had reached about 950 million US dollars and that the rate of student enrollment had declined at all levels in Syria from 93 to 65 percent.

The report reviewed details of the educational situation in the Idleb, Aleppo and northwestern Hama provinces, and documented the most prominent statistics regarding the educational process and the violations committed against it.

The report said that there were 348 schools in the western and northern Aleppo countryside and that the number of educational staff in the area numbered 5,623, including 4,050 teachers.

It said there were about 100,121 students in schools in western and northern Aleppo countrysides (excluding the Euphrates Shield and Olive Branch areas) at the three school levels.

According to the report, 100 schools had been damaged in Aleppo, distributed throughout educational centers in the rural areas of the provinces covered in the report, saying that the rates of damage varied from school to school.

The report said that there were 175 schools in the rural areas of Hama governorate, distributed in three educational complexes. The number of students enrolled in the schools of Hama countryside reached 18,922, while the number of faculty working in the education sector in Hama reached 1,092, including 885 teachers.

The report showed that most of the schools in Hama countryside were damaged due to their proximity to the front lines and to the sites of fighting with Syrian regime forces. The report said 1,548 classrooms and administrative rooms in the Hama countryside and been damaged partially or completely.

The number of faculty distributed at the schools amounted to 24,200 people. The number of damaged schools was 96, varying between partial and total destruction.

The report stressed that the cessation of financial support and donations for the educational sector, as well as the lack of teaching staff, reliance on old and classical curricula, as well as educational facilities being struck, were among the main challenges and obstacles that hinder the development of the educational process in areas of northwestern Syria.

The report recommended that work be done to repair damaged schools through humanitarian organizations, and that stable, reliable support be provided for schools, as well as that schools that are still in good condition be made active in the educational process, and that the educational sector be kept apart from political disputes, among other recommendations.