Cooperation in the oil and mining sectors was among the subjects of discussions between the Iranian and Syrian officials in Tehran, according to state news agency Sana 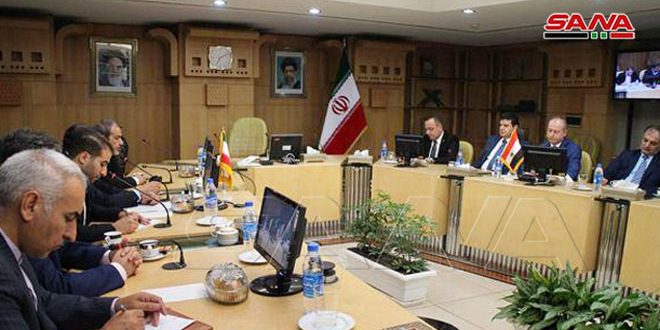 Minister of Petroleum and Natural Resources Ali Ghanem and Mohammad Eslami, Minister of Roads and Urban Development and head of the Iranian side in the joint economic ministerial council between Iran and Syria, discussed areas to develop strategic cooperation between the two countries in various economic, investment and productive fields, particularly oil and oil production.

During the meeting in Tehran, both sides confirmed their intent to continue bilateral cooperation and to raise the level of relations to the excellent level of political relations between the two. The two also stressed achieving real partnerships between Syrian and Iranian businessmen in the private and government sectors.

Minister Ghanem highlighted the meeting in the Chamber of Industry, Mines and Commerce, with private sector Iranian companies in the oil and oil production sectors, adding that, “Views were exchanged around what is needed with respect to investment in Syria, and all questions on this topic were answered.”

In addition, Ghanem spoke with Hassan Daniye Far, the first deputy adviser to the Iranian president of the Iranian-Iraqi-Syrian economic relations committee, about ways to improve the economic, commercial and investment relations and commercial exchange between Iran and Syria and what is currently required and will be required in terms of redoubling joint efforts to reach better results in their joint projects.

Minister Ghanem also spoke with his Iranian counterpart Bijan Namdar Zangeneh about the prospects for strategic cooperation in the oil sector.