Mouallem says the Syrian government is ready for the works of the constitutional committee, according to Al Watan 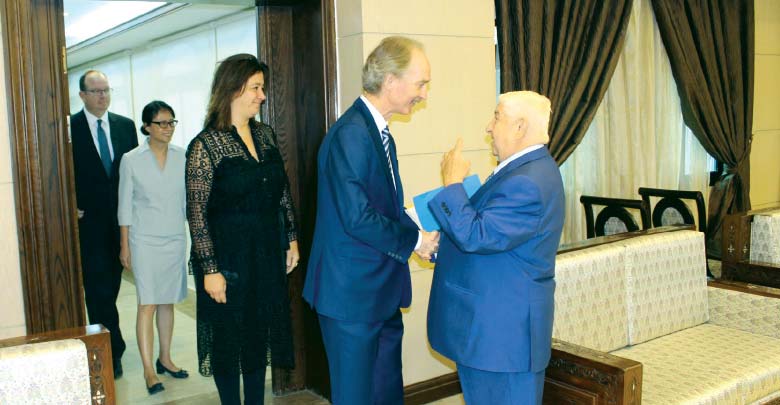 Damascus has officially announced the launch of the constitutional committee’s work after 18 months of negotiations, preserving and respecting the aspirations of the Syrian people and their right to decide their own future without foreign intervention.

During his participation in a celebration held by the Chinese embassy in Damascus, Deputy Prime Minister and Foreign Minister Walid al-Mouallem announced the start of the constitutional committee’s work, saying: “After a visit by the UN special envoy to Syria, Geir Pedersen, there was an agreement on the details of this committee thanks to the support and guidance of His Excellency President Bashar al-Assad during 18 months of negotiations.”

Mouallem declared his belief that this announcement on the launch of the constitutional committee was good news for everyone and offered thanks to friends in China and the Chinese peace envoy, who had taken an interest in this issue. He also thanked friends in Russia and Iran, who had kept up negotiations to reach this result.

Mouallem said in a press statement that the Syrian leadership had completed work on the constitutional committee thanks to the directions of President Bashar al-Assad, and that the leadership had maintained the aspirations of the Syrian people and respected these aspirations. He expressed his hope that this committee’s work would lead to a political solution to the crisis in Syria.

The minister responded to a question from Al-Watan regarding the so-called “Self-Administration’s” rejection of the launch of the constitutional committee, saying: “And who said they were participating?”

Minister Mouallem’s statements came hours after he received Pedersen. Mouallem affirmed Syria’s commitment to the political process and was ready to continue cooperation with the special envoy to make his mission a success and to facilitate Syrian-Syrian dialogue to arrive at a political solution under Syrian leadership and ownership, while exercising their legal and legitimate right to continue to fight terrorism, in accordance with international law and the UN charter and all UN Security Council resolutions related to Syria.

According to the official SANA news agency, outstanding issues related to the formation of the constitutional committee were discussed during the meeting, as well as the mechanisms for its operations, in a way that guarantees it is conducted in accordance with clear, previously-agreed measures, without foreign intervention. It said these discussions were positive and constructive.

Viewpoints were aligned that the Syrian people were the only ones with the right to lead the constitutional process and that Syrians needed to be the ones to decide their future themselves without any foreign pressure in a way that ensures the desired progress in the political process, arriving at a restoration of security and stability for all parts of the Syrian Arab Republic, as well as affirming the need to fully respect Syria’s sovereignty, independence and territorial unity, and reject terrorism in all its forms.

Pedersen gave a presentation around the results of the meetings he held recently, praising the progress in the political process and expressing his readiness to carry out the necessary efforts to take part in facilitating Syrian-Syrian dialogue and achieving the desired results.

Pedersen described his discussions with Mouallem as successful and said in a press statement that he had held a “very positive meeting” with Mouallem to complete discussion of outstanding issues on the formation of the committee.

Immediately after the end of the “successful” talks held in Damascus, the UN Secretary-General Antonio Guterres announced the formation of the Syrian constitutional committee, saying that the committee would hold its first meetings in Geneva in the coming weeks, adding that its formation “the launching of a Syrian-organised and Syrian-led constitutional committee can be the beginning of a political path towards a solution.”

Sources told Al-Watan that the committee’s first meetings were expected to begin at the end of October in Geneva.