Tens of thousands of displaced Syrians have left the al-Rukban camp, as Syria and Russia lash out at the US presence in the country writes SANA. 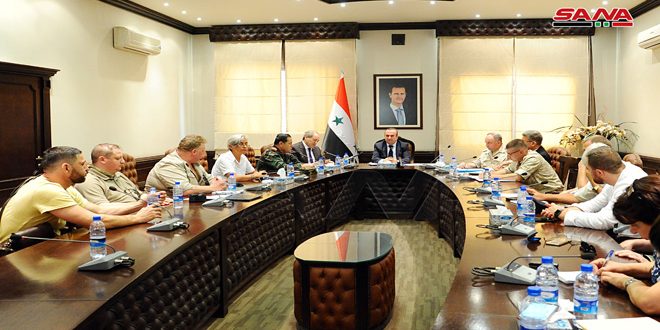 Syrian and Russian Coordination committees for the return of displaced Syrians announced that thanks to joint Syrian-Russian efforts, more than 29,000 civilians have been evacuated from the al-Rukban Camp, and that work is underway to evacuate the remaining displaced people there.

During a press conference on Monday, the Local Administration Minister, Hussein Makhlouf, said that more than 29,000 civilians have been evacuated and housed at fully-equipped temporary housing centers where they are provided with food and healthcare.

He said that every displaced citizen at the camp, even those who had taken up arms, can return if they want to and benefit from amnesty decrees.

For his part, the Deputy Foreign and Expatriates Minister, Faisal Mikdad, said camps, particularly al-Rukban, are “American colonies on Syrian territory,” and that the US doesn’t shoulder the responsibilities that come with occupying the al-Rukban and al-Hol camps, instead placing that burden on international organizations and the Syrian state.

Mikdad said that Syria won’t remain silent for long over the illegal US occupation of Syrian territory.

Meanwhile, the Deputy Commander of the Russian forces operating in Syria, General Alexei Bakin, said the evaluation committee of the UN and Syrian Arab Red Crescent is drawing up lists of people who wish to leave the camp, noting that the Syrian state has established 50 temporary housing centers.