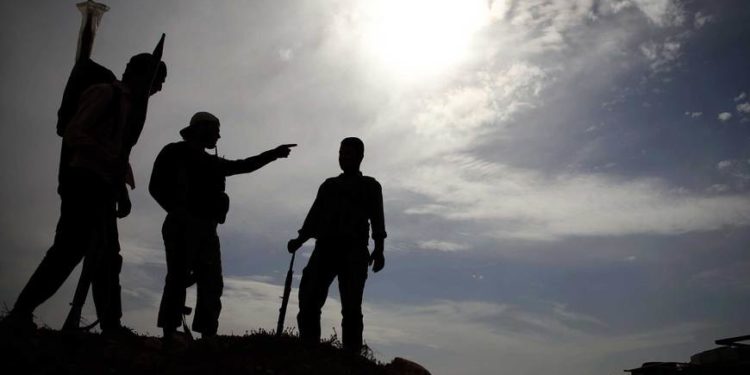 A prominent commander in Hay’at Tahrir al-Sham known as Abul Abd Ashda published a video recording on Tuesday under the title “So the ship doesn’t sink,” discussing administrative and financial corruption in the group and the mistakes that its leaders have made, bringing internal rivalries into the open at a time when Idleb province is headed towards an unknown fate.

The commander, who was previously the general commander of the Aleppo City Bloc and is currently the general administrator of the Omar bin Khattab Brigade, said that, “despite the group’s considerable monthly income, its members do not receive a monthly grant, and many of them have left because of severe poverty. There are administrators who receive more than 250 dollars a month.”

Ashda said that Tahrir al-Sham had known of the regime’s intention to invade the northern Hama countryside front more than two months before the operation began, and despite that they had not done any fortification, camouflage or military preparation in the area, and that they had submitted to international instructions and agreements and withdrawn from east of the railroad because of that.

According to the same commander, the group is not giving support to the positions of other groups, despite controlling the area, while its fighters are deployed in a quarter of positions and the other groups cover three-quarters of these positions.

Regarding the huge amounts that Tahrir al-Sham receives, he revealed that when it was first formed, it received 100 million dollars of support from an unknown entity. Its monthly income increased after it took control of more capacities from areas outside regime control up to 13 million Syrian pounds.

He continued that Tahrir al-Sham had confiscated 10 million dollars and 1,100 different machines, warehouses and sugar factories and others from the Nureddinn al-Zinki Movement.

He added that it had worked to strengthen its security wing at the expense of its military wing and had fought against development and innovation, and that the group did not spend anything on the military wing except “a very, very little.”

He said that the group had monopolized the fuel trade, which had caused 100,000 people to lose their jobs working in the trade and production of fuel. It also monopolized a number of trade activities, which heavily impacted other traders.

In addition, it has taken taxes from wheat from farmers and landowners and forced them to sell wheat at low prices and then sell it entirely to one trader, and has also sold to regime areas, according to the commander.

Over the last few months, voices have grown louder demanding that Tahrir al-Sham dissolve itself so that areas outside regime control can avoid bombardment, with Russia using the group’s presence as a pretext to fight terrorism in the area.

Despite the al-Nusra Front declaring that it was breaking ties with al-Qaeda and changing its name to Jabhat Fatah al-Sham in 2016, and then to Hay’at Tahrir al-Sham and then attempting to form a military body with other rebel groups, it has not succeeded, and Western countries have continued to classify them as a terrorist group and stress the need to fight it in Syria.