Bouthaina Shaaban has warned Syrians against working with the Americans, saying that the army will liberate every region of Syria reports Al-Watan. 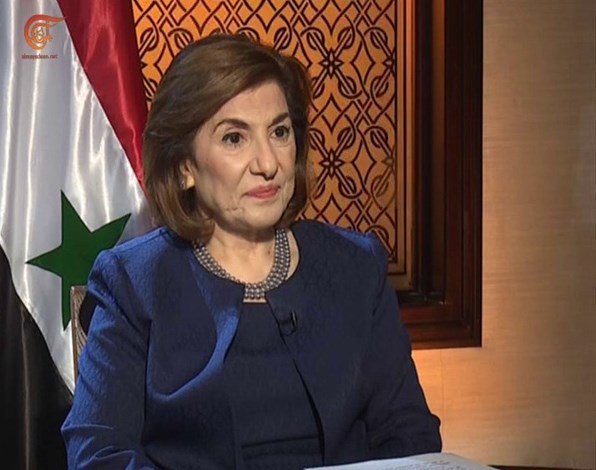 Presidential Political and Media Advisor Bouthaina Shaaban said that the announcement of the ceasefire that took place in the north was not the first of its kind, describing this procedure as routine in an ongoing battle, and pointed out that every action taken by the army, including the ceasefire, is to serve a major strategy, which is to liberate Syria from terrorism and the occupiers. The battle for the liberation of Idleb and every inch of Syrian territory continues. She said that the cease-fire was temporary and a military tactic used by the army to serve its objectives.

In an interview with Al-Mayadeen TV, Shaaban stressed that coordination between the Syrian-Russian leadership is continuous and permanent. She pointed out that the most important words issued by President Vladimir Putin during his recent meeting with Turkey’s President Recep Tayyip Erdogan, were when he said that: “It was agreed with the Turkish President that it is necessary to remove the hotbeds of terrorists in Syria, and it was agreed to commit to the unity of Syria and its safety.” The Russian statement shows that the battle continues, and that the sovereignty and territorial integrity of Syria is the strategic objective that Syria and Russia seek to achieve, according to Shaaban.

Regarding Erdogan’s recent statements that he has no ambitions in neighboring countries, Shaaban stressed that his remarks are in complete contradiction with his actions, and his domestic political situation seems to push him to make confusing statements, stressing that Erdogan has ambitions in Syria and Iraq, and he has long had a hand in this war against Syria, and the crimes committed against the Syrian people, and has been coordinating with the terrorists and he has not committed to either Astana nor to the de-escalation zone.

Regarding the safe zone, Shaaban considered that Turkey and Washington have no right to talk about any safe zone, because this is an aggression against the Syrian Arab Republic, and from the Syrian strategic perspective, it will liberate every inch of its territory. Shaaban sent a message to US collaborators, reminding them how Americans treat their tools in the region, how Washington always lets them down, especially when it sees how they betray their country, and advised them to be honest Syrian citizens and to support their country rather than work against it, because the Syrian Arab Republic will remain a unified state.