The two sides discussed the advances of the Syrian Arab Army and the opportunities for China to take part in the reconstruction writes SANA. 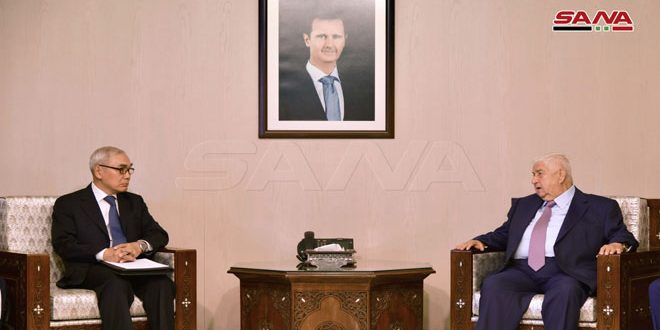 The meeting dealt with the strong bilateral relations between the two countries and the importance of the constant coordination between them at all levels, in a way that contributes to upgrading the relations to the strategic level as aspired by the leadership of both countries.

The meeting also touched upon the latest developments in Syria and the region with the two sides in agreement on the importance of going ahead with counterterrorism in Syria, to confront the danger posed by terrorist organizations to the security and stability of the region and the whole world, in parallel with achieving advances in the political process to solve the crisis in Syria.

Muallem presented a detailed overview of the outcomes of the talks with the UN Special Envoy for Syria, Geir Pedersen, with regards to the Constitutional Committee and the heroic operations of the Syrian Arab Army and its allies in confronting the terrorist organizations positioned in the northern countryside of Hama and southern countryside of Idleb.

He stressed that Syria will not cease confronting the terrorist organizations in all their forms, until every inch of Syria is liberated and security and stability is restored to the country, in spite of the blatant Turkish intervention to rescue the terrorist groups and in spite of the US occupation of some Syrian territories in a flagrant violation of Syria’s sovereignty.

He pointed out the importance Syria attaches to its relation with China and to Syria’s appreciation of China’s stance in support of the war against terrorism and of its pivotal role in international and regional arenas.

He also reviewed the efforts exerted by the Syrian government to secure the needs of citizens and secure what is required for reconstruction, particularly in light of the difficulties imposed by the “economic terrorism” and the unilateral coercive economic measures adopted by the US and its allies against Syria.

For his part, China’s Special Envoy stressed China’s principled and firm stance in support of Syria’s right to combat terrorism, hailing the victories achieved by the Syrian Arab Army.

Xiaoyan reviewed the outcomes of the talks held in Tehran and Geneva in recent days with senior Iranian officials and the US Special Envoy to Syria, stressing a rejection of foreign interference in Syria’s internal affairs and the importance of achieving advances in the political process.

He expressed China’s keenness to continue developing relations with Syria in different spheres and maintain coordination between the two countries, as well as supporting the efforts exerted by the Syrian government in the reconstruction process and securing the return of Syrian refugees to their country and providing all possible assistance in this regard.