As the fighting between the regime and the opposition forces continues to rage, the Deputy Defense Minister visited troops and told them to remain in a state of readiness writes Al-Modon. 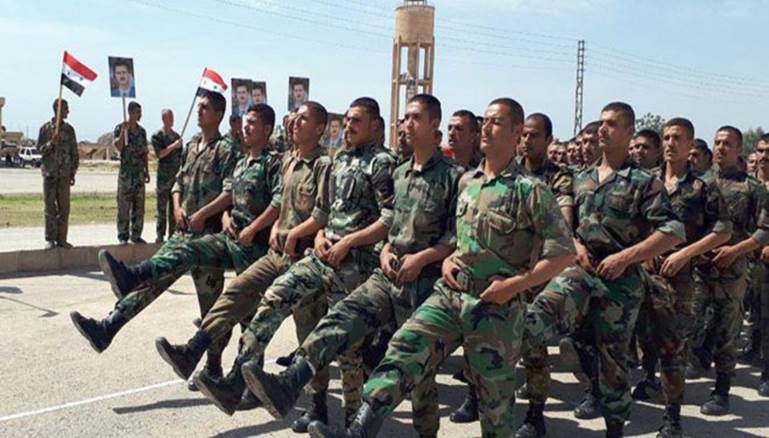 Coinciding with Turkish-American preparations to set up a safe zone in northern Syria, Syria’s Deputy Defense Minister, Major General Ali Saleh, arrived at Qamishli airport on Monday evening as part of an announced trip, and then headed directly to the remaining regime military units in Hassakeh province, according to Al-Modon’s correspondent, Mohamed al-Khalaf.

The Deputy Minister’s visit focused primarily on the Tartab Regiment, with him meeting officers and soldiers, and encouraging them to remain in a state of high readiness and preparation to “defend the nation against attempts to divide and occupy it.” He then inspected military points outside the regiment.

During his visit and after inspecting sites on the ground, the Deputy Minister ordered the construction of three new military points for the regime in Qamishli city, facing positions of the Kurdish People’s Protection Units (YPG) in the village of al-Namatli, the main entrance to Qamishli from the eastern side, and a point in the village of Tel Bareesh, near the international highway opposite the village of al-Uwayneh, which is controlled by the YPG.

The regime maintains a limited military force in Hassakeh, which has not participated in any fighting so far, except to repel attacks by the Free Syrian Army at the start of the revolution as well as later attacks by the Islamic State (ISIS). In addition, it has the two security squares in Hassakeh and Qamishli. At the civilian-military Qamishli airport there are helicopters stationed, which carry out military transport missions, given that the roads between the regime military units in the area are cut off. Likewise, they are transported in and out of Hassakeh by air.

The Malebiyeh Regiment was deployed at the southern entrance of Hassakeh, but ISIS took it from the regime and then it was later taken by the International Coalition, who used it as a base in southern Hassakeh. In 2012, the YPG took control of the Tel Adas base, which is used as a launching station for the defense of the Rumailan oil fields.