The regime is continuing its assault on the northern province of Idleb, with 100 fighters from both sides killed since Saturday reports Zaman Al Wasl. 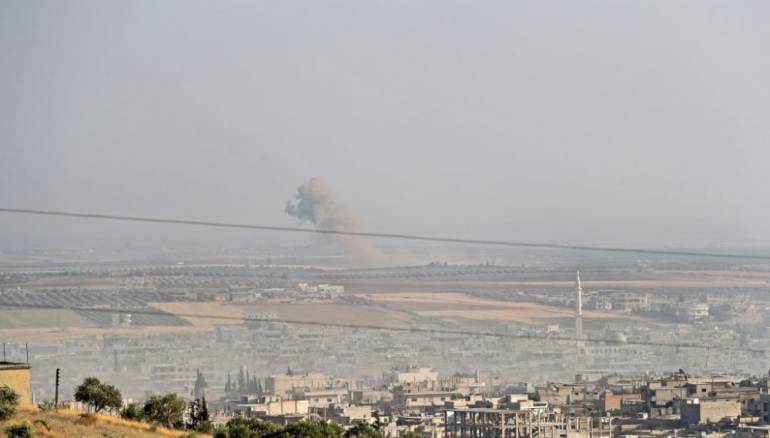 On Tuesday, Syrian rebels said a Russian drone had crash landed in the al-Ghab Plain in northwestern Hama province, as clashes with regime forces and allied militias continued.

Since Saturday, the fierce fighting has killed more than more than 100 fighters from both sides, as the regime army unleashed about 2,000 air and artillery strikes against rebels dug into Syria’s northwest, according to the Syrian Observatory for Human Rights.

The three-month offensive has made slower progress than any by Assad since Russia entered the war on his side in 2015, which prompted a run of military victories that have returned most of Syria back under his rule.

Rebels fighting to oust him are now concentrated in the northwestern enclave, covering most of Idleb province and parts of Aleppo, Hama and Lattakia provinces, though they also have a small presence in the southeast near the border with Jordan.

The northwestern offensive has prompted warnings of a new humanitarian crisis by the United Nations and aid agencies, with hundreds of thousands of people having fled the violence to seek shelter at the border with Turkey.

Since the beginning of the northwestern offensive in late April, regime airstrikes have killed more than 850 civilians and displaced more than 440,000.

The Russian intervention in Syria was officially announced on Sept. 30, 2015, after an official request by the Assad regime for military aid against rebel groups.