Since taking control of the areas south of Damascus, the regime has arrested hundreds of people who agreed to reconciliation deals reports Zaman Al Wasl. 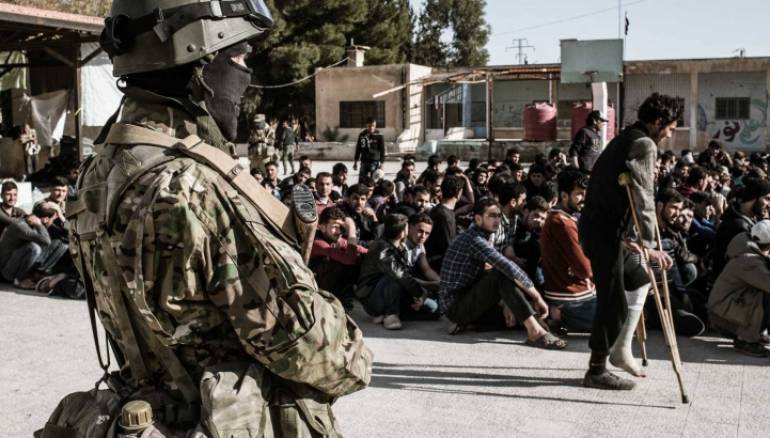 The Syrian regime’s military intelligence has carried out an arrest campaign tracking former rebels fighters who agreed to a  reconciliation deal in the southern suburbs of Damascus, local activists said Wednesday.

The notorious Military Security Division, known as the Palestine Branch, has arrested three former commanders of rebel factions in addition to Palestinian refugees who work at a relief agency in the so-called reconciled areas of Yelda, Babila and Beit Sahem, south of Damascus.

In the last few months, regime security has carried out a wave of arbitrary arrests against former activists and rebels fighters who surrendered under deals brokered by Russia.

The so-called “reconciliation” agreements that restored regime control over swathes of central and southern Syria last year were heavily criticized from the start because they were signed under the pressure of a military blockade and intense air and artillery bombardments.

The Assad regime offered amnesty to all who agreed to end their anti-regime activities.

But thousands of residents, particularly former fighters and their families, chose to be evacuated to the remaining opposition-held territory, rather than accept renewed rule by the Assad regime.

Human Rights Watch (HRW) said its research showed that former regime critics and opposition fighters who signed up for “reconciliation” had paid heavily for their decision.

Syrian organizations have documented at least 500 arrests across the three areas since August, it added.

“Active combat has ended in much of Syria, but nothing has changed in the way the intelligence branches trample the rights of perceived opponents of Assad’s rule,” said HRW’s acting Middle East director, Lama Fakih.

“Lack of due process, arbitrary arrests, and harassment, even in so-called reconciled areas, speak louder than empty government promises of return, reform and reconciliation.”

“In all cases, the people targeted… had signed reconciliation agreements with the government,” it said.

It called on Moscow to use its influence with its ally Damascus “to stop arbitrary detention and harassment,” and help “release arbitrarily held detainees.”

According to opposition sources, Assad regime has thrown at least 500,000 people behind bars since the conflict began in 2011, and the detainees have been suffering terrible conditions in the prisons.