In a meeting with Cardinal Peter Turkson, President Assad highlighted the need to combat terrorism and bolster efforts to head towards peace and stability writes SANA. 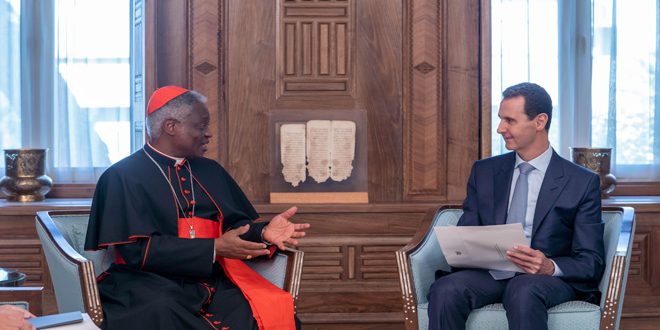 On Monday, President Bashar al-Assad received a letter from His Holiness Pope Francis, delivered by Cardinal Peter Turkson, Prefect of the Dicastery for the Promotion of Integral Human Development.

In his letter, the Pope reiterated his support for restoring stability in Syria and ending the suffering of the Syrian people caused by war and what resulted from it.

Talks during the meeting with Cardinal Turkson and the accompanying delegation focused on recent developments in Syria, with Assad pointing to the crimes and attacks against civilians that are still being committed by terrorists located in the areas where they are based, particularly in Idleb, as well as the support that is still being sent to terrorist organizations by some regional and Western countries.

The talks also touched on political efforts and how to support them, with Assad stressing that the most important thing that can be done to help the Syrian people is pressuring the states that support terrorists, seek to prolong the war and impose sanctions on the Syrian people, so that these states would change their approach and move towards bolstering peace and stability instead.

The meeting was attended by Fr. Nicola Riccardi, O.F.M., Under-Secretary of the Dicastery, and Cardinal Mario Zenari, Apostolic Nuncio to Syria.