The finger of blame has been pointed at Iranian militias for an attack on a Russian convoy in the southern province of Daraa reports Brocarpress. 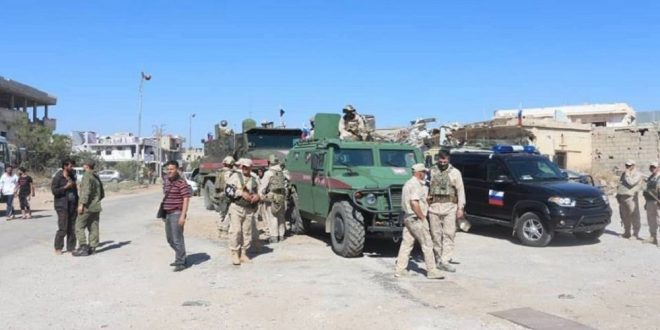 The military and strategic analyst, Brigadier General Asa’ad al-Zouabi, said that it is most likely that Iranian militias were behind the attack of the Russian patrol in Daraa the day before yesterday.

Brigadier General Zouabi said: “We have major evidence of this. If we consider who attacked the Hemeimeem base—it was an Iranian-made drone. There were statements by the Russian Defense Ministry months ago that said that the drone that attacked the base belonged to a country, and that could be a reference to Iran, and not Israel or another, because they knew the flight code and everything.”

He added: “There are suspicions from the Defense Ministry that there are Iranian elements who want to provoke Russian forces.”

Zouabi didn’t not rule out regime members or officers being behind the attack, based on the lack of acceptance by officers and fighters of Russian forces, who impose pressure and restrictions on them.

He added: “Elements from the regime and Iranian militias want to sow strife between residents and Russian forces who limit some of the regime’s terrorist practices in the region.”

The analyst said that the possibility that the attack was by the so-called “Popular Resistance” was no more than 10 percent, even though the Russians are working alongside and in the regime’s interests and not for the people in the south.

Unknown attackers blew up the road between the two towns of al-Sahwa and Basra al-Sham, with an explosive device while a Russian convoy passed, causing damage.

The group that calls itself the Saraya al-Janoub, which has carried out sophisticated attacks against the regime in Daraa, denied responsibility for planting the bomb and accused Iranian forces, according to activists on social media.