Following the recent election in Istanbul, Syrians living in Turkey are set to face increased pressure and scrutiny of their residency and living arrangements writes Al-Araby Al-Jadeed. 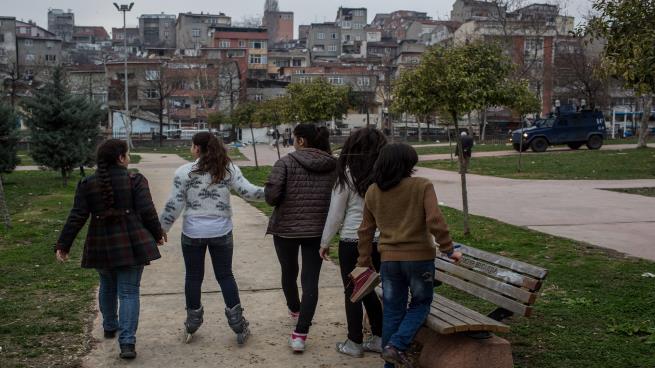 It appears that the coming period will witness a tightening on Syrians in particular and Arabs in general in Turkey, specifically in Istanbul, in terms of legalizing their presence and work. This was announced by the Turkish Interior Minister, Suleyman Soylu, on Saturday during a meeting with Arab and Syrian activists and journalists, to clarify the new Turkish approach, which he said had become necessary.

In the meeting, attended by the Governor of Istanbul, Ali Yerlikaya, and the head of the Migration Department, Abdullah Ayaz, Minister Soylu said that some Turkish groups and political parties had used the refugee issue—especially Syrians— “to make internal political gains out of the Syrian issue, which is unacceptable and must stop.”

Soylu pointed to the need not to create any demographic changes in Turkish states. He added, “It is said that in Istanbul there are some 600,000 Syrians and that 150,000 of them moved from (other states) over the last three years.” He said that they would tighten registrations for any new refugees in Istanbul, except for humanitarian health cases or births.

The head off the Migration Department in Istanbul said that 547,000 Syrians had temporary protection cards and that the city was overcrowded with Syrians with touristic residence.

But he reassured Syrians after threatening campaigns and calls for them to be expelled were carried out by some Turks recently, saying: “Turkey is doing what it can for Syrians to live well on its territory.” He called on the media not to publish incorrect news, which had been broadcast by some people with bad intentions, as he put it. He added: “Turkey’s doors are open to everyone and will remain.” But he said guests needed to “comply with Turkish laws and rules.”

Yerlikaya said that, “Syrians who are not registered in Istanbul will be returned to their cities and prevented from moving between provinces to prevent unregistered work.”

Soylu promised to provide a hotline to inform about hate crimes, noting that the ministry had each week arrested about 300 people for hate crimes on social media.

He said that Turkish President Recep Tayyip Erdogan, during a meeting of the central decision-making body in the ruling Justice and Development Party, will evaluate the results of the last local elections and that his government will take new measures towards Syrians in Turkey that includes three issues which are: encouraging return, expelling those who commit crimes, and stopping free medical services.

In the period after the elections, Syrians saw a tightening in the application of laws, starting with stores being asked to take down Arabic signs not complying with Turkish standards in Istanbul. The Labor Ministry also imposed tightened conditions to obtain work permits. In Turkey, 3,605,615 Syrians live in various provinces, according to statistics from the Turkish Migration Department in 2019.