Syria denies chemical weapon findings, Assad meets with the Russians, Nasrallah praises efforts of Hezbollah in Syria and more civilians killed in Idleb. Catch up on everything that happened over the weekend. 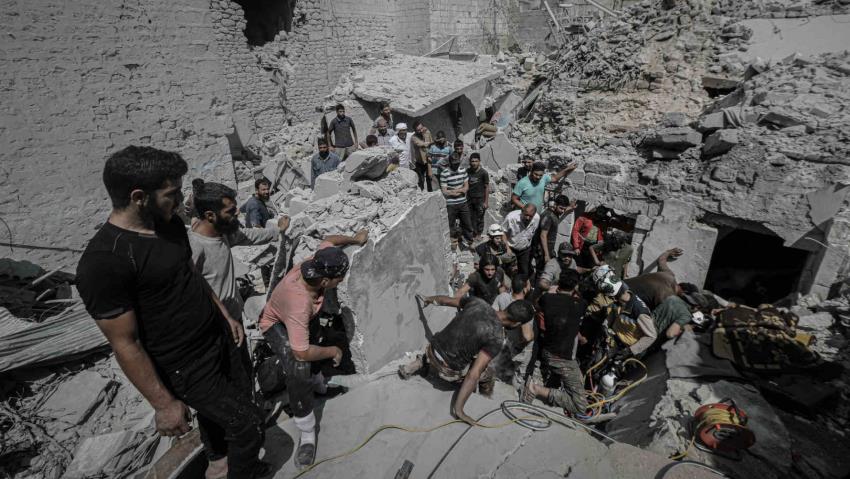 1. Syria’s Permanent Representative to the Organization for the Prohibition of Chemical Weapons (OPCW) Bassam Sabbagh said that the OPCW report on the allegations of the use of chemical weapons in Syria lacks credibility and objectivity and distorts facts, SANA reported. In a joint press conference with the Russian mission at the OPCW held at The Hague, Sabbagh said that the emergence of such allegations about the use of chemical weapons in Syria came after Syria succeeded in completing the elimination of its chemical weapons program, and after the victories achieved by the Syrian government against terrorist groups, which enabled it to regain control over large areas of Syrian territory. He said that in order to clarify the truth about these allegations, Syria responded positively to the initiative of the Director General of the Organization to establish a Fact-Finding Mission (FFM) to gather information on these allegations and to confirm whether chemical weapons or toxic chemicals were used or not.

2. On Friday, President Bashar al-Assad received the Russian President’s Special Envoy to Syria, Alexander Lavrentiev, the Russian Deputy Foreign Minister, Sergey Vershinin, and the accompanying delegation. Talks, according to SANA, focused on the continuing efforts to make progress on the political track, especially in forming a committee for discussing the constitution and the mechanisms and procedures of its work, and the two sides were in agreement on the need for them to continue working extensively and coordinating on the next steps to achieve the desired results in this framework, stressing the importance of not allowing the countries that are trying to prolong the war on Syria to hinder this process.

3. Secretary General of Hezbollah, Hassan Nasrallah affirmed that the Lebanese resistance is strong and it has developed in quality and quantity, adding that the Israeli enemy fears the resistance. Nasrallah was quoted by SANA as saying, “Syria, along with the resistance, defeated terrorism,” Nasrallah said in his an interview given to Al-Manar TV on the 13th anniversary of July 2006 aggression, adding that Syria is recovering from the monumental failure of the opposite project.

4. On Friday, at least 13 civilians were killed in Syrian regime air raids in the country’s northwest, including three children, a war monitor said. Another 45 civilians were wounded in the strikes across the Idleb region, according to the Syrian Observatory for Human Rights. Those killed included three people in Idleb city, the capital of the opposition province, which until Friday had been spared strikes by the regime and its Russian ally since they stepped up their bombardment of the region more than two months ago. “It’s the first time that the raids hit the centre of Idleb, after being confined until now to its suburbs,” said Observatory head Rami Abdel Rahman.

5. On Thursday, UN Secretary General Antonio Guterres strongly condemned airstrikes in northwestern Syria following reports that four health facilities were hit during a single day of bombing, Al-Araby al-Jadeed reported. An ambulance center, a clinic and two hospitals including one in Maarat al Numan, which is among the largest in the area, were attacked on Wednesday, according to the Union of Medical Care and Relief Organizations, said a Syrian doctors’ group. “Civilians and civilian infrastructure, including medical facilities, must be protected,” said Guterres in a statement released by his spokesman.