Following the Kurdish National Conference and a flurry of visits by Arab and foreign political delegations, Kurdish groups have met to discuss creating unity in northeastern Syria reports Enab Baladi. 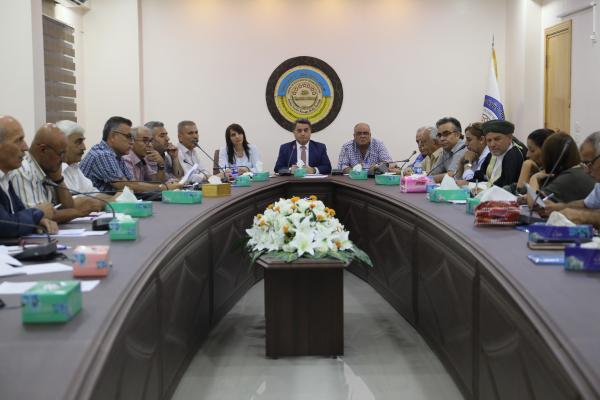 Kurdish political parties gathered in the Self-Administration areas in the city of Qamishli with the aim of unifying Kurdish ranks with international and regional backing.

The Hawar news agency reported on Thursday, that 28 Kurdish political parties met in the foreign relations department of the Self-Administration in Qamishli city to discuss a draft political document with the aim of forming “Kurdish unity.”

The agency added that the meeting was closed to the media and that, “it was expected that the attendees would come out with a public statement at the end of the meeting.”

The political draft which the political parties discussed emerged from the Kurdish National Conference, which was held in in Qamishli on Jul. 4, 2019. A committee also emerged to communicate with Kurdish parties with the aim of uniting them.

For this purpose, the 28 parties met in Qamishli with representatives of the Self-Administration to discuss the mechanism and how to unify the views of all parties in the area, based on instructions from the Kurdish National Conference.

Those meeting with the Self-Administration discussed opening unlicensed party offices, releasing prisoners to end disputes and reaching a unified formula to achieve “Kurdish unity” in the areas of northeast Syria, according to Hawar.

This comes within the context of the political mobilizations carried out by Kurdish forces and movements in northeast Syria, in parallel with the Arab and foreign political and diplomatic mobilization in support of implementing the project for which these forces are striving.

The Self-Administration areas east of the Euphrates have witnessed repeated visits by Arab and foreign delegations on a high level over the last few weeks, the most prominent of which were the American, French, Swedish and other Gulf delegations, as well as visits by the American Special Envoy to Syria, James Jeffrey, to Deir ez-Zor.

On June 20, a delegation from the Self-Administration met with the UN Special Envoy to Syria, Geir Pedersen, to discuss the political solution in Syria and the role of the United Nations, in the context of the Kurdish forces’ efforts to contribute fundamentally to the political process in Syria with support from Arab and foreign countries.