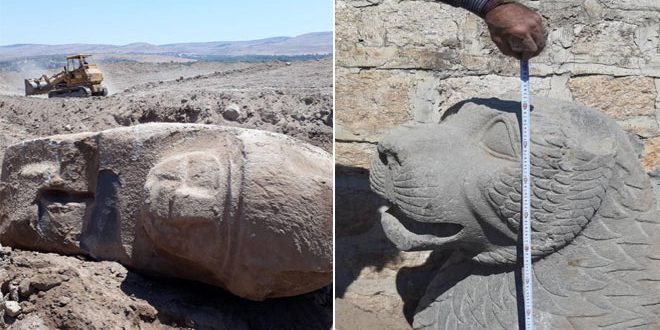 The General Directorate of Antiquities and Museums appealed to international organizations, legal and academic figures, who are interested in culture, to intervene and protect Syrian cultural heritage, putting an end to the unjust aggression of the Turkish occupation forces on archaeological sites in the Aleppo countryside.

In a statement on Wednesday, the Directorate said that the latest information coming from the Afrin area refers to the Turkish occupation forces and their mercenary terrorists bulldozing archeological hills on the Afrin plain to excavate the treasures and archaeological findings stored beneath, which date back thousands of years, leading to the desecration of the archaeological layers and the destruction of illuminated pages of the history and the civilization of the Syrian people.

The statement said that photos from the area show that rare statues and sculptures were found, dating back to the first millennium BC and to the Roman era, adding that the Turkish aggressions are mostly taking place at Afrin’s archaeological sites that are registered on the list of national heritage, among them Tel Birj Abdalo, Tel Ayn Darah, Tel Jinderous and the site of Nabi Huri.