Under the slogan, "From Damascus… to the World," the Damascus International Fair is promising to bring together business and culture from across the country, region and world reports SANA. 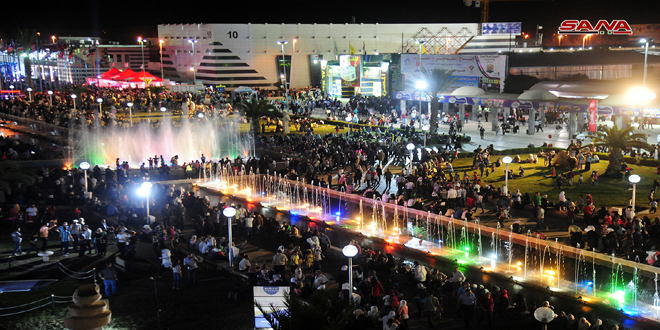 With the return of summer, Syrians prepare for the Damascus International Fair, the biggest and most prestigious local event that has been combining business, social activity, cultural exchange, entertainment for more than 60 years.

The oldest fair in the region, the Damascus International Fair was held for the first time in 1954, lasting an entire month on the old fairgrounds located between Victoria Bridge and the Umayyad Square by Barada River, with several local, Arab, and international pavilions set among green spaces and water fountains.

The Fair has played an important role throughout its history in showcasing Syria’s industrial, commercial, agricultural, civilized, and cultural facets to the world, as well as developing economic relations with other countries since it represents a platform for showcasing local products and signing contracts on local, Arab, and international levels.

The first Fair saw the participation of 26 countries, and witnessed the first display of the Cinerama widescreen format outside the United States, with over 100,000 Syrians and visitors seeing it in action for the first time.

The nearby Damascus Sword monument, located in the Ummayad Square, has always been linked to the Fair since its construction in the 1960s, being used to showcase the flags of the countries participating in the fair during its duration.

With the increasing congestion in Damascus and the rising number of participants throughout the years, the Fair was moved to the New Fairgrounds in 2003, located on the road leading to Damascus International Airport, and designed according to the best international standards over an area of 2.2 million square meters.

After a hiatus of six years, the Fair reopened in 2017, resuming its position as the most prominent economic, social, cultural, and artistic event in the country, sending a message to the world affirming that willpower and life triumph over war and death.

The 60th edition of the Fair held in 2018 saw the participation of 1,700 companies from Syria and 48 Arab and foreign companies, using up 93,000 square meters of the Fairgrounds’ area, the largest area to be used since its inception.

The 61st edition of Damascus International Fair, held under the slogan “From Damascus… to the World,” will be held from Aug. 28 to Sept. 6, 2019.