Residents of the capital’s southern suburbs have complained about being blocked from returning to their homes and the lack of basic infrastructure writes Zaman Al Wasl. 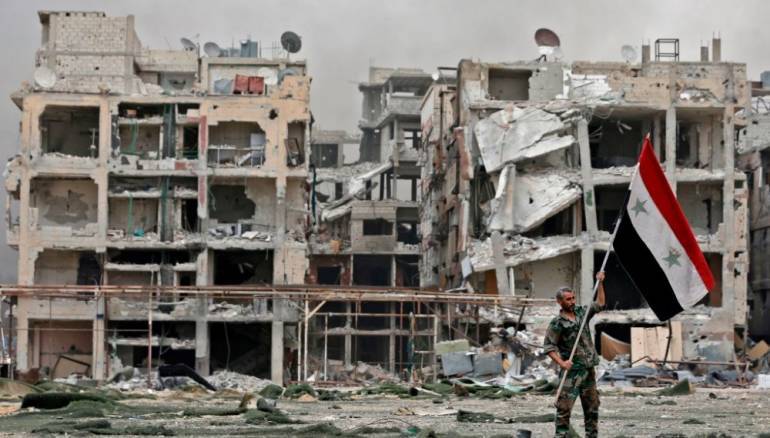 Residents of the capital’s southern suburbs called on the Syrian regime to accelerate reconstruction, secure infrastructure and restore electricity and water to the region.

According to the Action Group for Palestinians of Syria, the residents of the Yarmouk Refugee Camp, al-Tadamon and al-Hajar al-Aswad districts have demanded, in a letter to the regime, they be able to return to their homes. They also called for neighborhood committees and a specific schedule for their return, as well as a disclosure of the areas included and excluded in the reconstruction project and the duration of the implementation of the project.

Local media activist Mohamed al-Shami told Zaman Al-Wasl that the return of these camps’ residents to their residential homes is not only limited by the security obstacles imposed by the regime, but also by their inability to rebuild and rehabilitate themselves, as well as the provision of the minimum of basic services like electricity, water and sanitation. The majority of people suffer from extremely poor living and economic conditions.

He added, “The residents are convinced that the regime stands behind a systematic clearance of these areas, either with the intent of exploiting Palestinian refugees for its own benefit or that it seeks to wipe their cause completely under the pretext of the existence of previous laws that allows them to remove slums surrounding the Damascus.”

Shami explained that elements of the Fourth Division, along with a number of other Palestinian loyalist factions, are carrying out raids on private property on Rama street in Yarmouk, that include extracting electricity cables, brass piping in baths, marble and ceramics from residential buildings, as well as public utilities such as cables and electricity poles.

Regime forces took control of both the Yarmouk camp and al-Hajar al-Aswad district last May, as part of an agreement with the Islamic State, which forced the latter’s eviction, as regime forces regained control of the regions. This agreement came after nearly a month of continuous bombardment with barrel bombs, rocket launchers and heavy artillery, resulting in the destruction of up to 60 percent of the infrastructure and housing there.