The Lebanese army plans to dismantle a number of concrete structures housing refugees, which is set to affect 1,008 families reports Zaman Al Wasl. 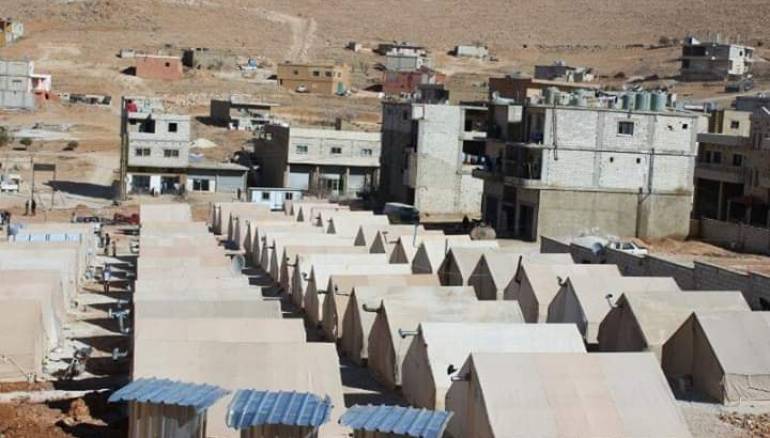 The Lebanese army have told Syrian refugees from 14 camps, who are living in concrete structures in the northern town of Arsal, that they have until Jun. 10, 2019, to leave, before the camp is destroyed.

Such a decision coincides with a situation of mounting disappointment among refugees, according to Zaman al-Wasl’s reporter.

The relief and official bodies from Arsal began to actively communicate with international organizations to secure tents, and provide them as alternatives to the estimated 1,400 families.

Sources in the Lebanese army command said that the decision to demolish these concrete camps is crucial for several reasons, most importantly is that these structures are illegal and constitute a security threat, noting that the decision includes the demolition of all uninhabited structures.

The Mayor of Arsal, Basil Al Hajiri, said in a press statement, “We informed the refugees of the need to implement this decision, and some have already begun its execution”. He explained to the camp supervisors that what is required is the removal of the ceilings and concrete walls, which cannot exceed one meter in height.

Hajiri confirmed that the number of these units is estimated at 1,400 tents, noting that meetings are being held with the Lebanese army to establish a clear mechanism of execution.

He added that the municipality will hold meetings with international organizations on Thursday to work to secure tents for families to replace the concrete structures.

The concrete shelters are distributed across 17 camps and are home to 1,008 families.

This decision comes in the shadow of a complete stagnation witnessed by the Syrian camps in Lebanon for the so-called “voluntary repatriation of refugees”, which is organized and supervised by the Lebanese public security, as there are no convoys carrying refugees back to Syria.

Official sources from the municipality of Arsal confirmed to Zaman al-Wasl that there are more than 200,000 refugees who have applied to register to return to their towns and regions inside Syria, but they had still not obtained security authorization from Assad’s regime at the time of publication.

Arsal camps have about 60,000 refugees, distributed across nearly 117 camps and residential compounds, all of which lack the most basic conditions of health, education and other appropriate services.