Syria is hoping that India will become an invaluable partner in the upcoming reconstruction stage and that Syrian and Indian businesses can form joint projects writes SANA. 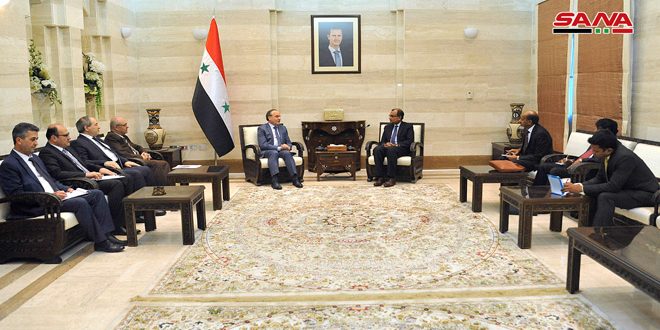 On Tuesday, Prime Minister Imad Khamis received the Secretary for Economic Relations from the Ministry of External Affairs of India, Shri T. S. Tirumurti, and the accompanying delegation.

Talks during the meeting touched on cooperation prospects between the two countries in the fields of economy and investment, as well as the participation of Indian companies in the reconstruction process, and the preparations for the meetings of the Syrian-Indian Joint Committee for Cooperation, which will be held soon.

Khamis thanked India for its firm position regarding Syria, stressing the need for establishing a solid basis for economic relations between the two countries.

He said that Syria is looking forward to bolstering trade, investment and scientific relations with India as well as benefiting from India’s expertise in the field of IT, and welcoming the participation of Indian companies in investment projects during the reconstruction stage.

For his part, Tirumurti hoped that the meetings of the Joint Committee will produce positive results, stressing the need to revitalize the role of the Syrian-Indian Businessmen Council and to cooperate in professional and technological training.

Tirumurti and the accompanying delegation also met the Grand Mufti of the Republic, Ahmad Badreddin Hassoun, who lauded the strong relations between the two countries and called for enhancing bilateral cooperation, particularly in terms of India’s participation in reconstruction.