Despite the protest being officially licensed, Turkish security forces have moved the protesting Syrians to an area far from the Russian consulate reports Hurriya Press. 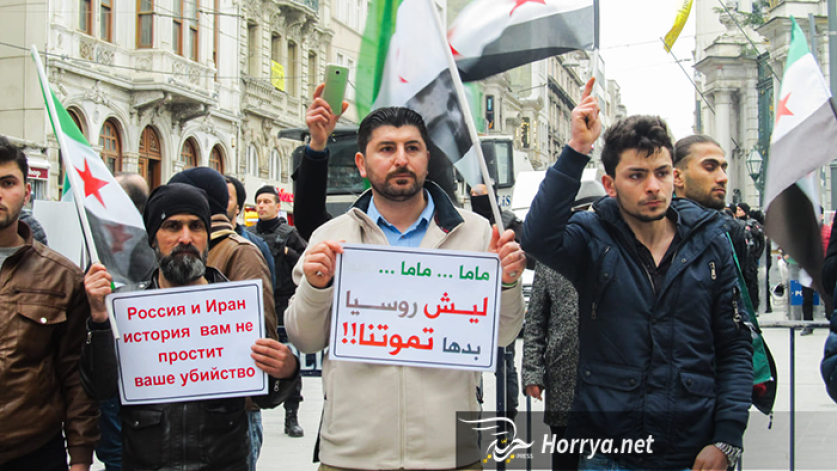 On Tuesday, Turkish security forces prevented a group of Syrian activists from holding a protest in front of the Russian consulate in the Turkish city of Istanbul to condemn the military campaign being carried out by Assad’s forces and Russia in the Idleb and Hama countrysides.

Hurriya Press’s correspondent in Istanbul reported that Turkish security forces have prevented Syrian activists from demonstrating in front of the Russian consulate and broke up the gathering and transported the protesters to another area far from the consulate without explaining the reasons.

Our correspondent said that the demonstration had been officially licensed, but that Turkish security forces prevented any gathering in front of the consulate and prevented it from raising slogans and signs against President Putin and Russia.

During the protest, they raised revolutionary flags and chanted slogans against the massacres which Assad’s forces and Russia have been carrying out against Syrian civilians.

Assad’s forces, backed by Russia, have over the last few days escalated the pace of bombardments in the Idleb and Hama countrysides, despite them being part of the “demilitarized zone” according to the Turkish-Russian agreement. This has displaced thousands of families who are fleeing the bombardment out of fear that Assad’s forces will invade their areas.