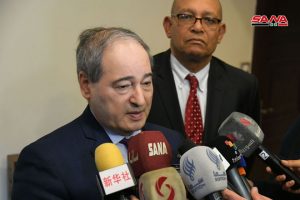 Mr Masemola said that the visit to the country aimed at supporting Syria’s firm stance in confronting the war of terror and to support resistance against Zionism and the Israeli occupation.

The delegation expressed the desire of a joint work for supporting resistance, calling upon all free forces of the world to cooperate for releasing all the political prisoners in the fascist Israeli jails. He also condemned Washington’s decision on the occupied Syrian Golan.

Mikdad stressed that the victories achieved by the Syrian Arab Army managed to restore the confidence of all those supporting resistance of the inevitable victory against the Israeli and Western schemes, which are basically targeting the Palestinian Cause, and of the roles of states standing in the face of the hegemony of the US and the West.

He also stressed the importance of coordination and cooperation between liberation movements in the world to foil imperialistic schemes.

Mikdad noted that Syria considers itself part of the front that has supported the struggle of the people of South Africa until they gained liberation from the apartheid regime.

“The visit of the delegation to offer support to the resistance reflects the spirit and life of the South African people who have fought against the Apartheid regime and have been able to end it,” Mikdad said in a press statement.

He added that the members of the delegation expressed solidarity with the Syrian captives in the occupied Syrian Golan, particularly captive Sidqi al-Maqt who has long defended his homeland, Syria, and uncovered the alliance of the Israeli occupation with the terrorist organizations.

“Turkey should recognize that its support to terrorism and its occupation of Syrian territories will not bring peace or security to it,” Mikdad said, calling on “the Kurdish organizations,” which became a low tool in the hand of the US, to be loyal to the Homeland.