The latest round of talks have begun in the capital of Kazakhstan, attended by the Syrian regime, Turkey, Russia, Iran as well as the UN Special Envoy to Syria, Geir Pedersen reports Al-Araby al-Jadeed. 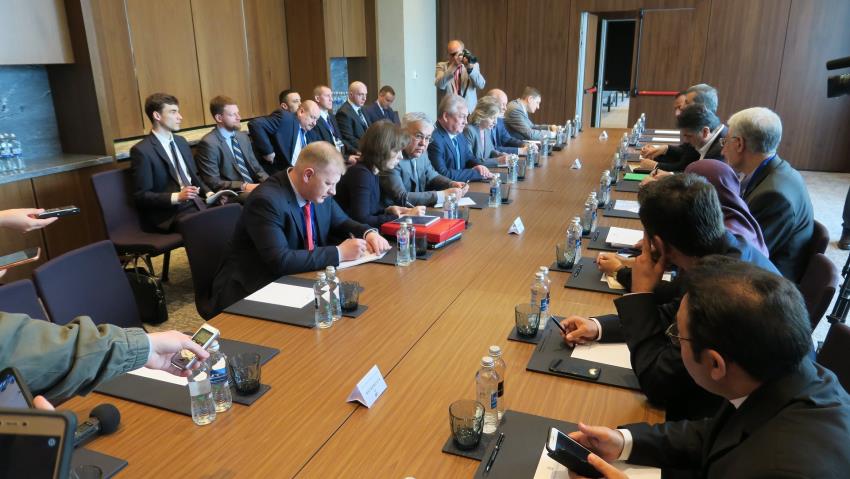 A new round of Syrian peace negotiations has begun in the Kazakh capital Nursultan (formerly known as Astana).

In addition to delegations from the Syrian regime and the opposition, representatives from the three guarantor states of the peace process, Turkey, Iran, and Russia, will also be attending. The UN’s Special Envoy for Syria, Geir Pedersen will also attend.

This is the 12th round of negotiations to be held in Nursultan / Astana. Previous rounds have failed to reach agreement between the regime and the opposition and expectations are not high for this current round.

The negotiations stalled on issues such as detainees in regime prisons, a proposed committee to draft a new constitution for Syria, and the opening of the Damascus-Aleppo highway, some of which runs through opposition-controlled territory.

Hundreds of thousands of political prisoners languish in Syrian jails, and monitoring groups estimate that up to 60,000 have been executed or tortured to death

However, Ayman Al-Assimi, a member of the Syrian opposition’s military delegation, told the New Arab that he expected that a constitutional committee would be formed by the end of this round of negotiations on Friday.

The composition of a committee to draft a new constitution has been a major source of contention. In December of last year the Assad regime rejected a UN plan to form a committee made up of equal numbers of delegates selected by the regime, the opposition, and the UN.

The negotiations are also expected to discuss the situation in Idlib province, most of which is controlled by Hayat Tahrir al-Sham, a group formerly affiliated to al-Qaeda.

The regime and Russia have bombed the area almost daily, killing and injuring civilians, despite a ceasefire agreed in September 2018, which was guaranteed by Turkey and Russia itself. They have also threatened to invade Idlib province, with Russia’s deputy UN ambassador, Vladimir Safronokov, recently telling the UN Security Council, “We don’t know for how long the status quo may continue. Frankly, it seems unsustainable to us.”

Since the beginning of the Astana peace process in early 2017, Russia and the regime have taken over three of the four areas which were held by the Syrian armed opposition – Ghouta, Daraa province, and northern Homs province – leaving only Idlib province under opposition control.

This is despite these areas being classified as “de-escalation” zones, where a ceasefire was in place.

Hundreds of thousands of people have been killed in the Syrian conflict, which broke out following the suppression of peaceful protests by the Assad regime in 2011. Most of the casualties were caused by regime bombardment of civilian areas.