Pictures of Russian and Iranian flags flown at a ceremony marking the 73rd anniversary of the withdrawal of colonial forces from Syria have not gone without Syrians noticing the irony. 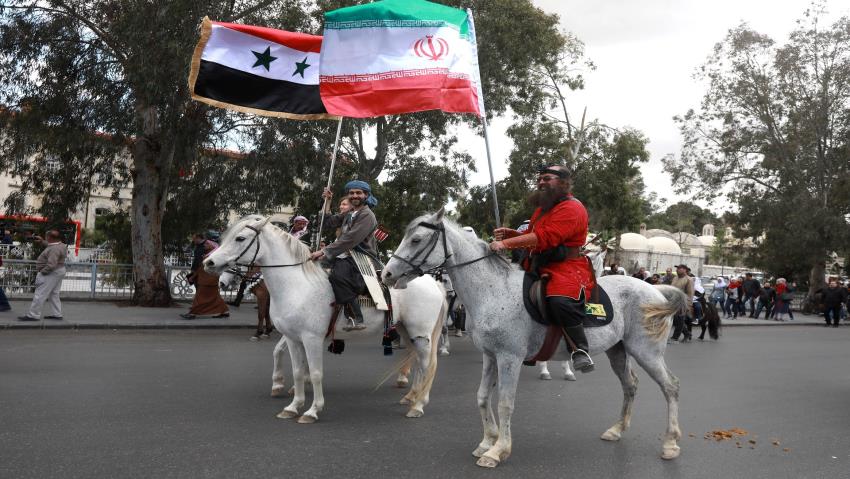 Syria was officially declared independent from French colonial rule on September 27th 1941, but it wasn’t until April 17th 1946 that the last foreign soldier left Syrian soil.

It is this date that has been celebrated as “Evacuation Day” ever since.

Yesterday was the anniversary of Evacuation Day (#عيد_الجلاء).  #Syria’s proclamation of full independence and the end of the French mandate of Syria on 17 April 1946. In #Damascus, all the flags had raised, but not the correct one!#Iran #Russia

The ceremony in Damascus, however, prominently featured Russian and Iranian flags.

Twitter user Yasser Wardh tweeted pictures of Russian and Iranian flags being flown by riders on horseback at the ceremony saying, “In my stolen and occupied country, this is how Bashar al-Assad’s regime celebrates Evacuation Day, by raising the flags of Russia and Iran!… you’ve understood evacuation wrong!”

Another Twitter user, Ghassan Al Kakouni, said “the regime gang celebrates the French colonial evacuation from Syrian land by raising the flags of the new occupiers, Russia and Iran…”

In 2018 the Russian Defence Ministry released a video saying that more than 63,000 Russian soldiers had seen combat in Syria while human rights groups hold Russia responsible for the deaths of thousands of Syrian civilians.