Using Law No. 10, Assad has received offers to rebuild destroyed homes in the Damascus suburb of Darayya, but many see this as opportunity for a land grab writes Zaman Al Wasl. 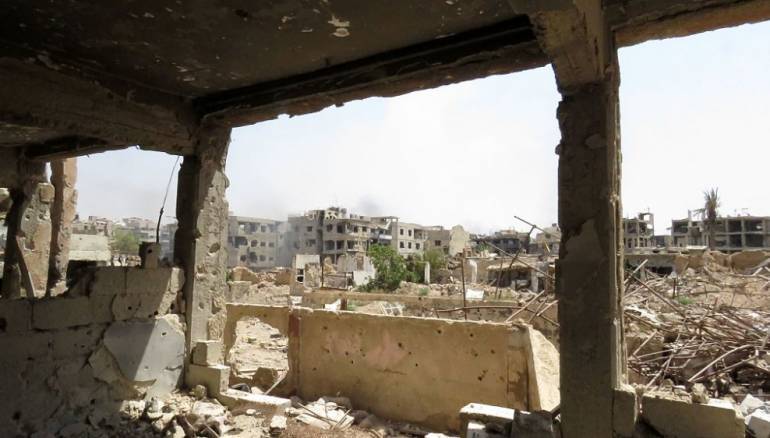 The Syrian regime announced that it had received offers from UAE and Jordanian real estate companies in relation to several projects in Daraya, the western suburb of Damascus in accordance with real estate Law No. 10, which is related to the reconstruction, and which has been criticized as an attempt to displace refugees.

Al-Watan, a pro-regime newspaper, quoted the Governor of Damascus Countryside, Alaa Munir Ibrahim, saying that the study aims to: “provide alternative housing for citizens whose houses have been badly damaged and are no longer suitable for habitation.”

Ibrahim announced offers from some UAE and Jordanian companies as well as Syrian companies to develop real estate areas, including “providing alternative housing for those whose homes have been damaged.”

“There are existing two-story buildings in some slum areas, while the developer is undertaking an organizational study of the area for buildings of about six or seven floors. This will be of benefit to lots of people.”

Ibrahim claimed that, “people have returned to most regions except for the areas where houses are completely destroyed,” noting that there is a study in accordance with Law 10 on real estate development of Daraya. Currently, it has been proposed to the executive office and if approved, the study will be announced. If rejected, the study will be re-formulated after the residents of the area are informed.

Ibrahim highlighted the preparation of proposals that will be submitted to the Reconstruction Committee to determine the priorities of the province, revealing that it needs 15 billion Syrian pounds, as assessed by municipalities.

Ibrahim explained that the Reconstruction Committee sets these priorities, adding that, “Currently we need two billion Syrian pounds ($4 million dollars) to terminate old contracts before balancing the amount indicated, especially since there are many contracts with public sector companies for the removal of rubble and the opening of roads, like in Ayn al-Fijah, Harasta, Douma and other areas.

Ibrahim pointed out that many of the rubble of the demolished houses in Harasta, Yalda and Babbila had been removed, and that work will begin in the al-Hajer al-Aswad area soon. A number of contracts have already been signed in  Ain al Faija, worth about 700 million Syrian pounds (1.4 million dollars), while contracts worth 400 million pounds (around 800,000 dollars) have been executed in the same area.