President Assad highlighted the shared struggle that the two countries face and the need for them to enhance relations and to serve common interests reports The Syria Times. 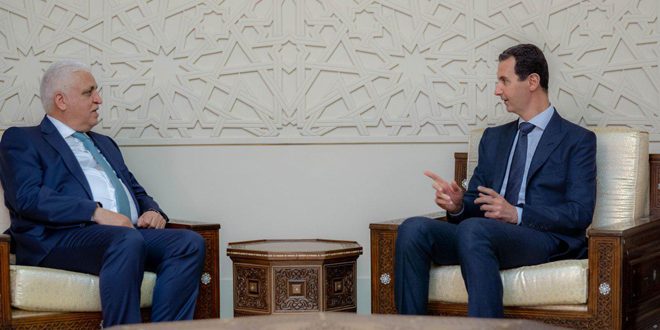 Talks during the meeting dealt with the bilateral relations between the two countries, affirming the necessity of developing them in different domains to serve the interests of the two brotherly peoples.

President Assad asserted that enhancing relations between the two countries serves the interest of the two brotherly peoples to complete the elimination of terrorism in a way that serves their common interests, as well as breaking the different hurdles imposed on them.

President Assad affirmed that Syria and Iraq are moving forwards to preserve their sovereignty and the independence of their decision making, in the face of the divisive schemes and the chaos plotted by enemies abroad.

He stressed that the fate of the region can only be determined by the region’s people, no matter how great the challenges.

For his part, Adviser Fayyad affirmed that Syria’s strength and its victory over terrorism is a victory for Iraq also and vice versa, any military achievement by the Iraqi side comes in the interest of Syria’s stability.