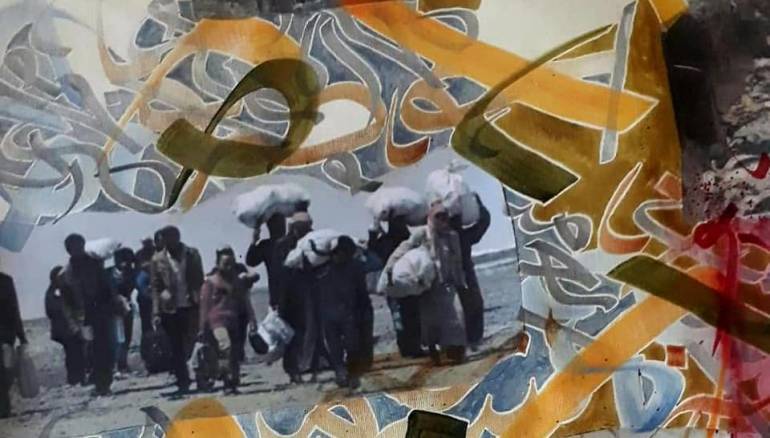 The artist is a part of society; he simulates the historical, social, intellectual, political and economic issues. He lives and experiences the changes within his society.

Salih al-Hajr, 40, told Zaman al-Wasl that he tried to visually document the rich details in the stories of people who have suffered greatly, and also document the times when Syrians demanded their legitimate rights and how they faced death and abuse.

In his new mural, Salih used Arabic calligraphy and photo collage to deal with the pain and the tragedy of lost and displacement (in and out the country) and reflect the suffering of Syrians.

He has tried to use his mural as a form of visual documentation. The mural is about 16-meters and took a month to be complete. According to him, it’s something new and different.

He explained that the mural is a kind of journalistic or investigative report, but that he tried to make his new work a permanent historical document that tell us about the tragedy and suffering of the Syrian people and summarizes what happened between 2011 and 2018.

Salih said that he recalled the dreams, pains and memories that people left behind, and through his work tried to document the hardships, fatigue and tragedies that people experienced.

As for his use of yellow and red on the painting, he explained that the desert areas were the only safe place during his journey of displacement and the red is the blood that was shed there by the Islamic State, who murdered more than 1,500 martyrs from the Shaitat tribe, and buried them in the desert of the Deir ez-Zor countryside.

On his choice of photographs and the use of collage, he explained that he selected these images from international news agencies websites and other credible sites for documentation purposes.