Lindsey Graham's pledge was a boost to Prime Minister Binyamin Netanyahu, who toured the Golan with him, ahead of April 9 Israeli elections writes Al-Araby al-Jadeed. 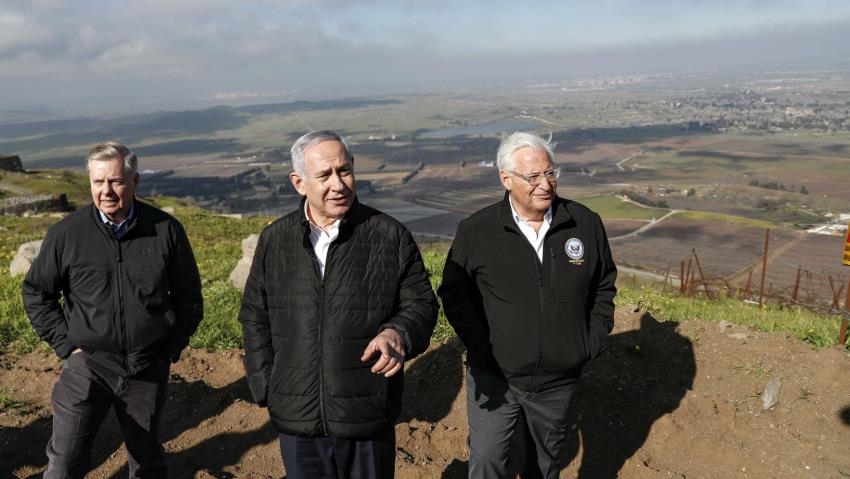 An influential US senator allied to President Donald Trump toured the occupied Golan Heights on Monday and vowed to work to have Washington recognise Israeli sovereignty over the strategic plateau.

Lindsey Graham’s pledge was a boost to Prime Minister Binyamin Netanyahu, who toured the Golan with him, ahead of April 9 Israeli elections.

Netanyahu has been pushing for the United States and other countries to recognise Israeli sovereignty over the Golan, which it seized from Syria in the 1967 Six-Day War.

Israel later annexed the 1,200 square kilometres it seized, in a move never recognised by the international community.

“Strategically, I am standing on one of the most important pieces of ground in the state of Israel, and who would you give it back to?” Graham asked, standing alongside Netanyahu and the US ambassador to Israel, David Friedman.

“You’re going to give it to Assad? I think not. You might as well give it to Iran,” Graham said, referring to Syrian President Bashar al-Assad, who is backed by Iran and Russia.

“You’re going to give it to Russia? I think not. So, the idea of this territory going to somebody else is off the table.”

Graham is a Washington ally of Trump, who has given strong backing to Netanyahu, and said he would work to have the United States recognise the Golan as part of Israel “now and forever”.

In November, the United States voted for the first time against an annual UN resolution condemning Israel’s occupation of the Golan.

Netanyahu has argued in his re-election campaign that his close relationship with Trump is a major benefit to Israel.

Trump handed a huge victory to Israel in 2017 when he recognised Jerusalem as its capital and decided to move the US embassy to the disputed city despite Palestinian anger.

Some 20,000 Israeli settlers live in more than 30 settlements in the occupied Golan Heights, and the territory has become a centrepiece of Israel’s tourist and agricultural industries.

The majority of the 23,000 Druze in the occupied Golan have refused to become Israeli citizens, instead remaining “permanent residents” of Israel.