The agreement signed in September between Russia and Turkey was supposed to limit the violence in northern Syria, but there has been little respite. 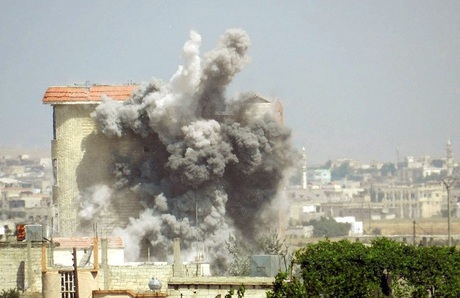 Over 160 Syrian NGOs signed a petition on the recent military escalations in northern Syria. They called on the ceasefire guarantors of Turkey and Russia to abide by their commitments to the demilitarized zones. They also called on UN Special Envoy and his team to use all channels to influence international diplomacy to advocate for the protection of civilians in Syria as a first priority for all stakeholders, and to ensure that peace talks go forward.

The text of the statement is below:

The 4.1 million people who live in northwestern Syria welcomed the Russian-Turkish agreement on the demilitarized zones last September. The agreement brought some relief to civilians who have been suffering from the consequences of the continuous hostilities in the area, despite the fact that approximately 40 percent of the population are IDPs, and 10 percent of the population live in non-stable homes, which lack basic humanitarian services. The ceasefire was an opportunity for civilians and civil society organizations, which provide services to IDPs, to improve conditions and circumstances in the area. But this agreement, like the ones that preceded it, was fragile, and in early February, the regime launched an offensive on the northern countryside of Hama and southern countryside of Idleb.

In the past 30 days, over 90 civilians were killed and over 300 were injured. We have encountered a ten year-old child called Hasnaa, who was severely injured while she was trying to save her younger sister Elaf, who was killed when regime military jets targeted their house in the town of Khan Sheikoun. Humanitarian and civilian facilities didn’t survive the offensive, the al-Durra bakery in Maret Alnuman town was completely destroyed after an airstrike directly targeted the building.

Over 8314 families fled from their towns, to be added to the 400,000 people living in IDP camps in northwestern Syria, displacement has been a major concern for humanitarian actors, especially with the very weak response from donors to such crisis.

The signatory NGOs call for:

The guarantors of the ceasefire agreement, Turkey and Russia, to abide to their commitments to the demilitarized zones.

The International Syria Support Group and especially the Istanbul, group to use all their diplomatic channels to enforce a political solution based on UNSCR 2254, and avoid military actions.