In light of the issues facing France, Syria has criticised the French President for the comments he made about Syria writes SANA. 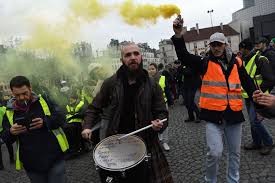 Statements made by the French President, Emmanuel Macron, confirm the continuation of the failed policies adopted by consecutive French governments regarding Syria, a source at the Foreign and Expatriates Ministry said on Monday.

The source said that these French policies are inspired by a dark legacy of colonialism and enslaving peoples.

The source stressed that Macron’s talk of the political process is merely an attempt to wash France’s hands clean of the blood that has been shed in Syria due to his country’s destructive policies.

“Those who provided support to terrorist groups, and whose foreign minister described al-Nusra terrorists as rebels, and worked to undermine political initiatives to resolve the crisis in Syria lack the minimum of credibility. They talk about a political process with colonialist Western criteria that contradict the interests and aspirations of  Syrians,” the source said.

The source went on to affirm that Syria is not the least bit interested in having relations with a state that contributed to terrorists, and whose hands are red with the blood of Syrians.

The source said Macron’s statements reflect the bitterness of defeat as the conspiracy against Syria has failed, adding that the French President, who lacks any public legitimacy, would be been better off dedicating his efforts to resolve the crises in his own country, instead of interfering in others’ affairs.