Ambassador Hussam Eddin Ala praised the Pope for speaking out against foreign interference in Syria reports SANA. 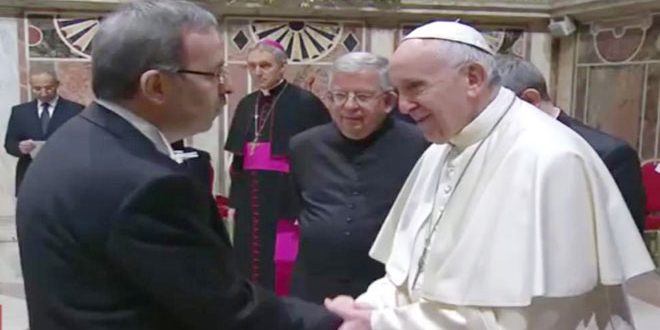 Syria’s Permanent Representative to the UN in Geneva, Ambassador Hussam Eddin Ala called for the lifting of unilateral coercive measures imposed on the Syrian people.

Ala, meeting Foreign Minister of the Vatican, Msgr. Paul Richard Gallagher, appealed to the international community to adhere to principles of international law in providing support for development efforts exerted by the Syrian government and to refrain from exploiting the humanitarian issues for the political agendas of hostile countries.

The Syrian Ambassador to the Vatican briefed Msgr .Gallagher on Syria’s victories in the field of combating terrorism and the challenges which have been facing the rehabilitation process.

He affirmed Syria’s determination to complete the liberation of its entire territory from terrorism and from any illegal foreign presence there.

Ala welcomed the statement of Pope Francis during his annual meeting with ambassadors accredited in Vatican when he criticized foreign interference and talked about the return of displaced Syrians to their homeland and contributions to the reconstruction process.