The withdrawal of US forces, the resignation of Brett McGurk, a ten year old boy killed in Idleb and Iraqi approval of the US decision. Catch up on everything that happened over the weekend. 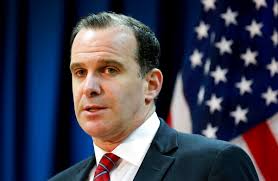 1. The Syrian Democratic Forces (SDF), an alliance of Kurdish and Arab fighters, which has spearheaded the ground battle against jihadists, warned that a US pullout would allow the Islamic State (ISIS) to regroup and launch a counterattack. Al-Araby al-Jadeed quoted a statement by the SDF, the US-led coalition’s main military partner in the battle against ISIS, as saying the move, “will have a negative impact on the counterterrorism campaign.” The statement continued, “It will give terrorism… the momentum to recover and conduct a terrorist campaign in the region,” and warned that it would create a “political and military vacuum in the area, leaving its people between the claws of hostile parties.”

2. The New York Times reported that Brett McGurk, the Special Presidential Envoy to the International Coalition fighting the Islamic State (ISIS), has accelerated his resignation, telling colleagues this weekend that he could not carry out President Trump’s newly declared policy of withdrawing the 2,000 troops stationed in Syria. McGurk, a seasoned diplomat, considered by many to be the glue holding together the sprawling International Coalition that has been fighting the terrorist group, was supposed to retire in February. But according to an email he sent to his staff, he decided to move forward his departure to Dec. 31, 2018, after Trump did not heed his own commanders and blindsided America’s allies in the region by abruptly ordering the withdrawal of US troops. His decision follows the departure of Secretary of Defense Jim Mattis, whose own resignation letter has been seen as a rebuke of the President’s actions in the region.

3. On Saturday, a ten-year-old boy was killed when militants of a former al-Qaeda branch opened fire on a van carrying civilians in northern Idleb province, local activists told Zaman Al Wasl. Hay’at Tahrir al-Sham said its checkpoint in the town of Ma’arret Mesrin, opened fire on a minibus after the driver refused to stop. The group, who were formerly-known as Jabhat al-Nusra, has killed most of its opponents, including citizen journalists and human rights advocates.

5. President of Iraq, Barham Salih, told US Secretary of State, Mike Pompeo, over a phone call, that the crisis in Syria can be solved by respecting the decisions of Syrian people and allowing them to determine the future of their country, emphasizing that the withdrawal of US forces from the Syrian territory should be a helping factor in settling the crisis. According to a statement issued by the Iraqi President’s Office on Saturday, and published by SANA, President Salih said that the “Syrian people paid a heavy price as a result of terrorism, which committed the most heinous crimes, in addition to the destructive foreign interventions.” Saleh stressed that the withdrawal of US forces should help to restore security and stability, and be based on respect for the rights of Syrians and their independent decision.