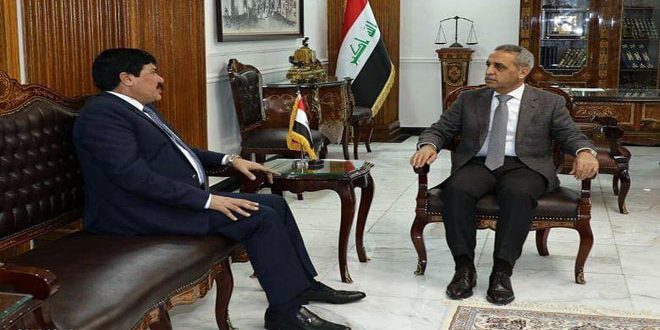 On Tuesday, Iraqi Transport Minister, Abdullah Luaibi, discussed with Syria’s Ambassador to Iraq Satam Jadaan al-Dandah means to enhance trade and to develop cooperation in the domains of land and air transport between the two brotherly states.

The two sides underlined the importance of opening of the border crossings between al-Bokmal in Syria and al-Qa’im in Iraq, to facilitate trade between the two countries.

Minister Luaibi said in a statement, “We discussed with Ambassador al-Dandah the return of the Iraqi air transport to Syrian airports using Iraqi airlines, in addition to bolstering bilateral relations between the two countries to develop transport activity and to set investment plans in various domains.”

A statement by the Council issued on Tuesday indicated that, “Judge Zidan discussed with Ambassador al-Dandah means to enhance cooperation in the judicial and legal domains and the role of the judiciary in combating terrorism in the two brotherly countries.”

In a statement to SANA, al-Dandah affirmed that opening the border crossings for the movement of people and goods will achieve significant and positive outcomes by increasing the levels of trade between the two countries.

He expressed hope that the next phase will witness unprecedented levels of Syrian-Iraqi cooperation in all domains.

He indicated that upgrading Syrian-Iraqi cooperation in the judicial and legal domains and activating the role of the judiciary in combating terrorism is one of the many tracks in which bilateral cooperation is rapidly developing.