At the 11th round of Astana talks,Dr. Bashar al-Jaafari said that Turkey was the prime suspect in the recent chemical attack in Aleppo reports SANA. 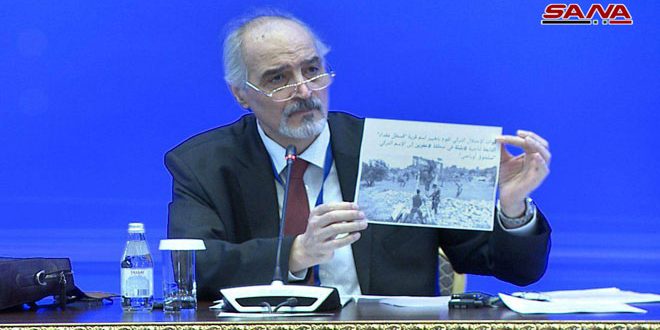 The head of the Syrian Arab Republic’s delegation to Astana’s 11th meeting, Dr. Bashar al-Jaafari, said that the Turkish regime’s lack of commitment to the Sochi Agreement on Idleb encouraged terrorist organizations to continue targeting civilians in Aleppo, Hama and Lattakia, stressing that if the agreement is not implemented through policy, it will be implemented by others methods.

Jaafari said that the Turkish regime had not committed to implementing the understandings regarding the de-escalation zone in Idleb, and as the Sochi agreement stipulates, not guaranteeing the withdrawal of terrorist groups from a belt extending 15 to 20 km deep to the west. “That enabled terrorist organizations to target Aleppo city with shells containing chemical substances more than once, which indicated that a decision has been made to escalate terrorism, by those who support terrorist organizations positioned in Idleb, especially Jabhat al-Nusra and the Islamic State (ISIS) and their affiliated groups.”

The senior diplomat said that the Turkish regime is the first suspect in the facilitation, transportation and use of chemical weapons by terrorists in Idleb, against the civilians in Aleppo, which constitutes a grave escalation that contradicts the Sochi Agreement.

Jaafari emphasized that the Syrian state will continue to combat terrorism in Idleb, in cooperation with the allies, and will no longer be patient, adding that there is limited time for the Turkish authorities to implement the Sochi agreement and make the terrorists retreat to a depth of 20 km to the west.

“What has been said should be part of the international political discourse of the UN and the other countries keen on implementing the UN Security Council resolutions in terms of ending up the crisis in Syria.