Over the course of two days, delegates will discuss the ongoing situation in Idleb, the return of refugees and the constitutional committee writes SANA. 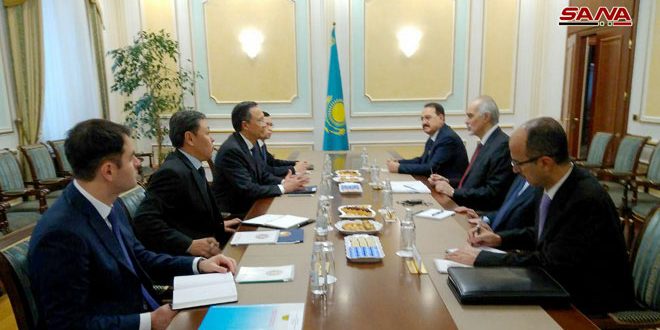 On Wednesday, the 11th round of Astana meetings, aimed at settling the crisis in Syria started in the Kazakh capital, with the participation of the Syrian Arab Republic’s delegation headed by Dr. Bashar al-Jaafari, and other delegates.

Director of Asia and Africa Department at the Kazakh Foreign Ministry Heydar, Beck Tomatov, said in a press statement that all the invitees to the 11th round of Astana meetings arrived in the Kazakh capital.

Tomatov noted that a delegation from the UN, headed by UN Special Envoy for Syria, Staffan de Mistura, arrived in Astana to participate in the meeting as an observer.

He added that representatives from the United Nations High Commissioner for Refugees (UNCHR) and the International Committee of the Red Cross (ICRC) will also participate in the meeting.

In statements to journalists, the head of the Russian delegation,  Russian President’s Special Envoy to Syria Alexander Lavrentiev stressed that participants in the current round of Astana meetings will discuss a number of issues, including the situation in Idleb and the return of displaced Syrians to their homeland, in addition to combating terrorism and the situation related to the constitutional committee.

The delegation from the Syrian Arab Republic started its meetings on the first day by holding a meeting with Kazakh Foreign Minister, Kairat Abdrakhmanov.

The Syrian delegation also held another meeting with the Russian delegation, headed by Lavrentiev, as the two sides held consultations on means to guarantee the success of Astana meeting.

During the meeting, the two sides exchanged views on the agenda of the current Astana meeting and the continuing coordination between the two countries in combating terrorism, in addition to the implementation of the relevant agreements of Astana, particularly those that are related to the de-escalation zone agreement in Idleb.